Somewhere in America, we start with a woman cooking, complaining of her grand children. A hairless cat sits listening to her rant over the food. At the door a strange man says she has died, she must come with him. This is Anubis (Chris Obi): “I am of death.” She is actually lying dead on the floor. It is now time for her to go elsewhere. She is Muslim, and wonders why Anubis is there for her. Because she learned about “Egypt of old” as a girl, therefore he will take her to “the scales.” Love the mythology of the various religions and cultures that comes together in the boiling pot of America. A testament to the genius of Neil Gaiman’s novel.
He takes the woman up through a mountain of building, fire escapes. Then they’re on top of a mountain, where the landscape becomes desert, far as the eye can see. They walk across the sand until reaching the scales. He rips her heart out and weighs it against a feather. Her heart is equal to its weight, so she goes further with Anubis to the Duad. Past which are many worlds. She goes on into a door and his cat pushes her in. Sneaky bastard.

Last we saw ole Shadow Moon (Ricky Whittle), he lost that game of checkers to Czernobog (Peter Stormare). In the middle of the night Shadow wakes to find the sky doing eerie things, the clouds crowding the city. Up top of the building he finds Zorya Polunochnaya (Erika Kaar), staring at the sky with a telescope, doing experiments or something wild. She’s watching a constellation, though takes time to read his fortune. “You believe in nothing so you have nothing,” she tells him. Very telling. Afterwards, she pulls the moon from the sky as a coin, placing it in Shadow’s hand. Then he wakes from his sleep.
Polunochnaya: “You‘d rather die than live in a world with bears in the sky”
Shadow tries making a new deal, another game of chess with Czernobog for his life. He plays upon the Old God’s vanity, saying one blow from him won’t likely kill anymore. He offers Czernobog a bit better of a deal, still resulting in his death either way. And so they play another game.
Meanwhile, Mr. Wednesday (Ian McShane) sneaks in to see Zorya Vechernyaya (Cloris Leachman). He believes she deserves more in life, promising it’ll all get better soon. She tells him that he’s going to fail at his latest mission, that he will be killed. At the same time, the chess game is on, as Shadow plays a tougher game this time around and wins.
Vechernyaya: “I can taste you on the rain. What else can I taste?”
Wednesday: “War”
When Shadow wakes in the morning he’s informed they’ll be robbing a bank soon. Now that’s a wake-up call.
Mad Sweeney (Pablo Schreiber) is quite the party animal, waking up in a bathroom stall at the bar. He’s kicked out and makes his way along the side of the road. A guy driving (Scott Thompson) stops to offer the hitchhiker a ride. He offers Sweeney a bit of advice before a steel rod flies off a truck impaling him through the face. What a car for Mad to step inside. Then he pours his pockets out trying to find something after the accident, pissed off for having misplaced or straight up lost it. 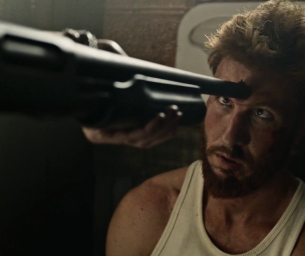 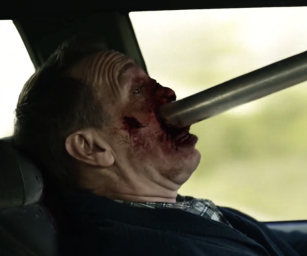 Elsewhere, we see a man named Salim (Omid Abtahi) walk through the streets looking somewhere between mystified and terrified of the city. He goes to a Panglobal Imports office for an appointment, though isn’t pleased with how long the wait takes. He waits, literally, all day. For nothing. Such a futile cycle, as he can’t make an appointment in person, only by telephone. So he smiles and heads out. The story of bureaucracy.
Salim gets in a cab and the man driving also speaks Arabic. They chat, reminisce of back home. They likewise lament their struggles in America, the pitfalls, so on. In a gridlock, the cabby falls asleep and Salim winds up seeing the eyes behind his glasses, like “burning flames.”
This man is the Jinn (Mousa Kraish), one of the People of the Fire. They touch hands, sharing a moment of the open desert in their minds. Poignant and touching. Up in a hotel room they meet and fall into one another’s arms. For some psychedelic lovemaking. Next day, the Jinn is gone, everything left behind. So Salim takes the glasses, the sweater, the cab, and heads out to meet the day.
Jinn: “They think all we do is grant wishes. If I could grant a wish, do you think I‘d be driving a cab? Once I had a man shit in the backseat.”
Mr. Wednesday brings Shadow to the bank he plans on robbing. Although our hero isn’t exactly thrilled with that plan. Particularly after just getting out of jail. Regardless, they head inside for a look. Cameras everywhere. Technology is watching, always. He’s worried about the authorities. I’d be worried about Technical Boy (Bruce Langley) and his ever watchful eye.
The old man keeps telling Shadow to “think snow” and to focus his mind. Eventually, this works, and he falls deep into his own mind. He wakes and the sky is pouring snow. Hmm, very interesting. They go out to eat and then Sweeney shows up, looking for his coin. The one Shadow has, apparently. His lucky one. Left at the grave of Laura Moon (Emily Browning).

The bank robbery is about to go down. Real smooth, too. Wednesday uses deposit slips he took from inside, blocks off the night deposit slot and the ATM. People requiring the slot then give him the bags, leaving their names, so on. Then cops show up. They end up calling the number Wednesday gives, the one from the business card he left with Shadow. A perfect circular plan. Money in the pocket.
When will Shadow come to understand the fantastic is a part of life? That the divide is not between real or fantasy, that the mythical can be concrete, vice versa. Nothing is as it seems. Nothing.
Shadow: “Americans know who they are”
Wednesday: “They pretend they know, but it‘s still just pretending.”
Sweeney actually digs up Laura’s grave. Except she isn’t there.
She’s waiting in Shadow’s motel room, waiting to see him after so long. But how?

What a strange and exciting episode! Love the gay sex scene because it’s great representation, plus psychedelic; two things you’ll not see anywhere else on television, I guarantee. Fuller & Co. are just spectacular, the right crowd to do this adaptation.
Next episode is “Git Gone” which will continue the saga, showing us more of why and how Laura ended up where she did, and what’s next for her and Shadow, and all of them.