Here we get a look at Bob (Lawrence Gilliard Jr) on the road before he met the big group. He was all by himself, wandering the wasteland in search of food, the next place to stay and rest. It went this way a long time. He’d stop and hole up someplace where the walkers couldn’t get him, drink a bit of cough syrup or whatever booze he could scavenge. A hard existence in the zombie apocalypse, being an alcoholic. Easy to try and block it all out with the aid of booze. Easy to get lost in your own head then, too.
Then came the day he met Daryl (Norman Reedus), riding on his bike down the road, Glenn (Steven Yeun) in a truck. They ask how long he’s been by himself, though he can’t exactly keep track. They ask him the “three questions” and Bob answers honestly. Daryl offers for him to come along, he gladly accepts. Because this, in a way, is saving him from himself. Even if he has a few alcoholism-related bumps over time. 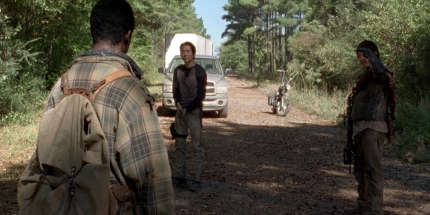 In the present, Bob is with his Maggie (Lauren Cohan) and Sasha (Sonequa Martin-Green), but they’re definitely not in a safe place. Walkers come from out the fog, unseen until so near. The three friends fight against them, taking each down. Except Bob winds up getting bitten. But lucky enough it didn’t pierce the bandage he already has on his previous wound.
Beth (Emily Kinney) and Daryl are doing better. He’s teaching her to track in the woods, to shoot the crossbow, all those sort of things. She ends up stepping in a trap. It doesn’t hobble her, though it isn’t helpful. No injury in this new world is helpful because you never know if you’ll find the medicine/First Aid materials to fix it, if it can even be fixed.
First mention of the word Terminus, the place up the tracks. Signs everywhere point to its direction. Sasha worries it’s “too good to be true” but both Bob and Maggie believe it’s worth the chance, the latter knowing Glenn would go there in search of her if he saw one of those signs.
Across a field Daryl and Beth find themselves a nice plantation-style home. Nobody inside, no walkers. Although they notice how clean it is there, that someone’s been staying. In fact, it’s a funeral home. There are bodies laid out, dressed, makeup done for a showing. Beth finds it’s beautiful, that somebody still cares about the dead.

In conversation together, Bob and Sasha talk about what’s best going forward. She wants to find a place to stick it out awhile; higher ground someplace. He’d rather go on, hoping there’s community at Terminus for them. A destination, a goal to reach. We see that Bob doesn’t like being on his own, nor does he like isolation, of any kind; even in a group. He’d rather be tight knit with others, Sasha doesn’t yet understand how low he sank by himself.
Beth: “It‘s like I said, there‘s still good people.”
Beth and Daryl settle in at the funeral home, even though it seems someone’s been staying there before. She plays a bit of piano by candlelight, he lays down in a coffin for a little relaxation. They’re comforted, even if only for the time being. Like life is normal, as it was once. You’ve got to take the little things when they come.
In the morning, Bob and Sasha wake to find Maggie’s gone on her own, not wanting them to risk their lives for her cause. He wants to run on, find her; Sasha feels otherwise. Regardless, they go together. Maggie’s on up the tracks, she finds another Terminus sign and decides on leaving a note for Glenn, in case he happens to come by the same route.

Suddenly, Daryl and Beth are crowded by a horde of zombies in the funeral home, breaking through the door. They run for outside quickly, teeth gnashing at their heels. He gets locked into the room downstairs, facing a load of the dead, but gets himself out with a bit of quick thinking.
But it’s too late. Someone’s taken Beth away in a car, her things scattered in the road; a black car, with either a cross or a First Aid symbol in the window. Leaving the last Dixon brother on his own once more. And he’s devastated, already feeling the people he lost were partly his fault. Now another one gone. Heartbreaking.

Sasha decides she doesn’t want to go on to Terminus. Then Bob lays a kiss on her, not wanting them to split on their journey. He heads off on his own like before and refuses to let Maggie go forward without him. Sasha looks for a place to stay, for however long she can. Funny enough, she comes across Maggie, who’s hiding from the dead. Noise wakes them up.
The women are back together, fighting off a group of walkers. When they’re done Maggie tells Sashs she’s needed, that they must stay as one. Not far up the tracks they find Bob again, too.
Along the road, Daryl comes across a familiar face: Joe (Jeff Kober), the one Rick (Andrew Lincoln) almost ran into in the house a ways back. These boys are the Claimers, a group who take what they can amongst themselves, claiming what’s theirs along the way. These are rough dudes, but right now Daryl would probably go on with anybody, if only to feel a part of something again. 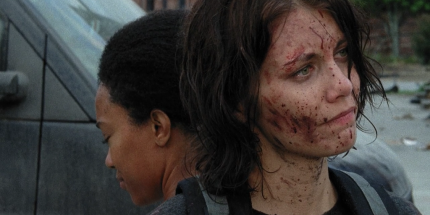 Lots going on in this episode. We’re seeing the beginning of many things, from Terminus to the Claimers and their whole racket. Can’t wait to watch them all come together more. “The Grove” is next.