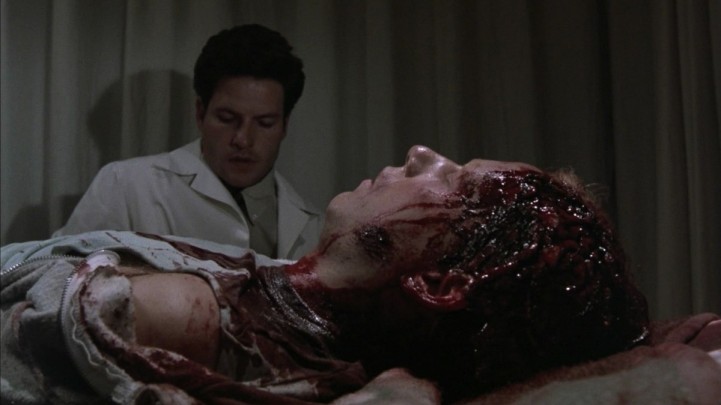 Stephen King is master of the macabre, a true genius when it comes to sucking us into the lives of his characters, many of whom are real, genuine people. A theme often present in his work is that of grief, both it effects and how we deal with it in our lives. Pet Sematary, which he also adapted into a screenplay himself, is a tragic look at grief, how it warps a family. Particularly focusing on a father whose sadness over the loss of a child takes control of his life, that of his family, and becomes something altogether terrifying.
There are moments in this King adaptation, crafted by the talented Mary Lambert, that still stick in the collective mind of horror fans to this day. Many of us would be excited to see a new, fresh remake. Regardless, there’ll always remain an undeniable scariness about this 1989 classic, an effect that will not soon, if ever, wear away.
No doubt about it, Pet Sematary is a dark, depressing film that gets crueller with each passing scene. In a proper horror sense, though, not unnecessarily just for horror’s sake. We plunge the depths of brutal, raw emotion with the Creed family and their various, inescapable tragedies. All the while King turns the mirror on humanity, questioning our faith, our belief, our methods of expelling grief from our lives. Not always a pretty sight.

Part of the profundity in this story comes out of the inability of the father Louis (Dale Midkiff), an adult, to explain death to his young daughter. In a sense, he doesn’t know what he himself believes, leading to his own bad decisions in turn resulting in plenty of horror. There’s an essence in King’s storytelling here, combined with the concept of the Pet Sematary in this little Maine town, which speaks to how adults explain the world in general to children. In that, often enough, the inability of adults to help kids comprehend big, scary concepts (i.e death, sex, et cetera) stems from their own fears, their insecurities. The horrific tragedy here being when Louis can’t deal with the death of his little boy, he chooses a fantastical belief in the supernatural to try changing the recent past. Only to create a hellish future for the Creeds.
Another excellent aspect is the use of the old Indian burial ground. Joining a few other films of its ilk, Pet Sematary doesn’t try appropriating any kind of cultural ghosts, anything similar. Instead, King makes it into a story where white people, not understanding the full implications of another culture’s beliefs and rituals, create chaos by stepping outside their own culture in ill-advised ways.

Best of all: the imagery. From the straight up horror to a visual motif Lambert weaves into a couple of the central characters, this film is ripe with juicy terror. The entire atmosphere creeps up on us immediately, a dreamy, fog-like quality to the cinematography, coupled with the eerie sounds of the score, the angelic-sounding voices, all swelling in our ears over images of graves. The quaint Maine countryside is contrasted with images of ugly violence, including the early introduction of Louis to a man who’ll come to haunt him later, Victor Pascow (Brad Greenquist), as he suffers in the emergency room after a bloody accident.
The most significant imagery involves the dead kid Gage (Miko Hughes) and his long dead aunt Zelda (Andrew Hubatsek). First, the story of Zelda, the way she looks as a character, is unsettling. Lambert chose Hubatsek to portray the ill woman, as she rightly felt this casting option would provide an extra unnerving quality for the sister, which is – for Father Gore – the film’s definitive, terrifying image. Even in the book Zelda is frightening, albeit tragically sad. Onscreen, she’s a horrorshow in and of herself.
But once you notice the clothes she’s wearing in those flashback moments, this directly parallels the look of little Gage after he’s brought back from the dead. A visual motif connects everything. Zelda’s illness, symbolised by Gage wearing a near identical outfit when he’s reanimated from the grave, is a parallel to the undead state of those buried in the Pet Sematary. Being that, it was more merciful for her to die than continue living in an already half-dead, torture state.
And why?

Lambert and King never shy from pummelling the audience with sadness, sticking the blade in our hearts, over and over. Gage’s death is punctuated with edits of family photos underneath the screams of Louis, wailing for his son after the transport truck crushes him on the road— heavy, harsh. From there, the happiness dissipates, and the Creed family is plunged entirely into darkness.
This transformation is effectively symbolised in the hellish look of the house at the end, as it warps like the reanimated lifeform of Gage himself. Life becomes death, all that is alive then decays, rots. The whole thing culminates in a seriously disturbed ending, one that doesn’t offer any hope, not even a glimmer, really. Although it does pose further questions, about how we cope with death, and grief in its aftermath, ultimately questioning to what lengths people will go to circumvent death, the grieving process, its hideousness and wake of self-reflection.
Unforgettably grim, Pet Sematary isn’t only one of the best King adaptations because the master himself penned its script, Lambert directs this with near flawlessness. She turns the great story into a modern Gothic tale crossed with elements of a zombie movie, wrapped in a personal story of death, loss, and love. There’s also the downhome feeling of being in Maine, as the movie was shot only 20 minutes outside Bangor and Fred Gwynne offers up that small town charm so inextricably linked with King’s setting and mood. But the horror is what grabs us, never letting go. Not until the bitter end.