* For recaps & reviews of Candle Cove episodes, click here.
* For a recap & review of the next episode, “Nice Neighborhood” – click here

We open on a neighbourhood, like any other. At the side of one house is a girl named Lacey (Jess Salgueiro), crying, looking petrified. Soon she walks out to the street, looking all around her, paranoid. And then we see the end of the street, where there stands an eerie, dark house. The girl walks quickly towards the place. Suddenly, a man is behind her. She runs, so does he. When he catches her, he tosses her hard into the ground, knocking her out. “Why‘d you do this to yourself?” he asks. We see what looks like deep cuts in her arm reading: THIS ISN’T REAL.
Cut to an ordinary house, a family. John Sleator (John Carroll Lynch) and his daughter Margot (Amy Forsyth) when she wasa little girl, growing up with dad at her side. Although a darkness looms over them clear from just about the minute we’re introduced. Now Margot’s older. She and her friend Jules (Aisha Dee) are the average American teens, trying to figure themselves and their lives out. Mom Corrine (Kim Huffman) is the typical mom, looking out for her daughter, taking care of business at work.
Out of nowhere, both the girls get a video on their phone: images of the dark house’s door, a blooming flower, morphing into other sinister shapes. They pass it off, just some stupid viral shit. They go to the bar, meet a couple guys for drinks, pool. One of them brings up the No-End House. “It just shows up,” he tells them. Now it’s in their town. Jules figures it’s a “super bougie haunted house” but he insists terrifying things happen inside, even disappearances. Although they all laugh.

Later we discover more about Margot. Her father died, complications from medication and allergies. She found him, too. All puffed up, sitting there dead. Worse, she blames herself for not being home on time that night, worrying that she might’ve been able to save him.
That night Margot sees the weird video on her TV. The No-End House appears, numbers, images, street names. Just as quick as it came, it’s gone. Cryptic messages calling her to the place. So, of course, they all hop in the car. Off they go to find the place together, the girls, Seth (Jeff Ward) and J.D (Seamus Patterson). When they arrive there are people everywhere, like a true carnival ride. Someone stumbles out and vomits, one guy heads in with a backpack on as if he’s heading on a journey. All kinds of people, lining up to go inside.

Faster than expected, they’re in. They come into a room with some 1920s-style music playing through crackling speakers, as well as containing a bunch of moulds that look like they’re fashioned as their faces. Everybody has one corresponding to them. Guy with backpack seems to know more about this place than anyone, having told J.D. he’s been “looking for” the house. Hmm. And naturally, the lights go out.
When they come back on the music’s distorted. The moulds of their faces are now cracked in half, moulds of hands breaking them open; all except for J.D’s face. Behind them a wall opens up revealing a passageway. They stumble into a new room, almost like an empty pool but still a room, a couple doors.
Except they’re locked inside. In the corner is someone wearing a black mask, he circles the group. Until finally coming around to Margot, leaning in and whispering to her. And it visibly affects her. When the lights flicker, there’s a smear of blood running along the floor, into the wall. This sends one girl from their group running back out.
“Welcome back, Martian.” 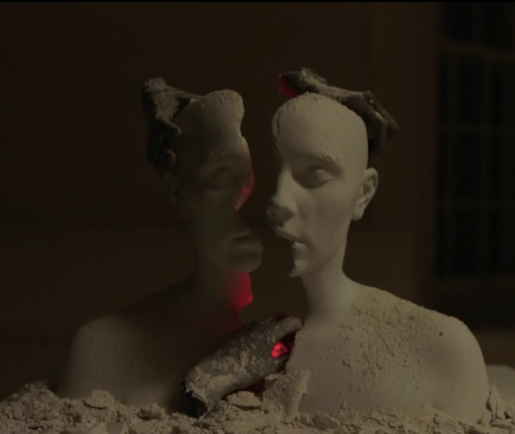 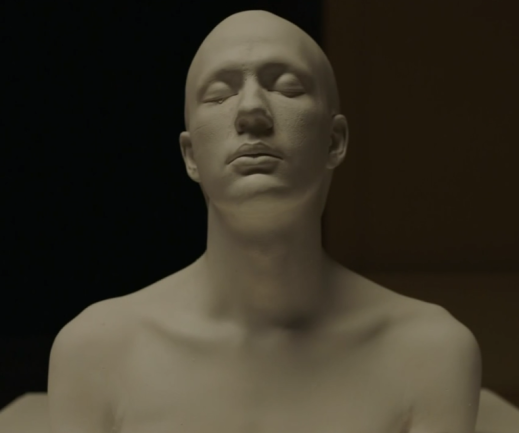 But Margot must go on, compelled by the words of the masked man. She heads in further, through a revolving door and into a hallway. A creepy man lurks partway through, half-laughing, half-screaming. She makes it past, though finds herself in a room like in an attic. She sees the morphing visions, her father. Then she goes into the next room, which leads her back to where she found her father on the couch. His corpse is there, puffy, grotesque. While Margot watches home movies playing on the TV, the sounds repeat, her father’s voice loud, calling to her. His corpse comes alive, trying to grab her, standing and reaching out for her, as if wanting a hug. And he does grip her in his arms, holding her against his bloated body while she struggles, repeating: “I want to go home.” But she’s reminded: “You have to go through to go home.”
She makes it through to find Jules outside. They can’t find the guys, assuming they went on home without them. After a long night comes morning, following a walk home when the car won’t start. It’s almost as if Margot’s been cleansed, having confronted part of her darkest fears. However, at home, life isn’t exactly the same as before. From the kitchen she hears the happy whistling of her father, cooking away. Like he never ever left.

Man, I loved Channel Zero‘s first season. This is already shaping up to be just as interesting. Love these stories, and love how the directors bring out the visuals so well. Some of this episode was downright creepy as fuck.
“Nice Neighborhood” is next week. I’m already dying.