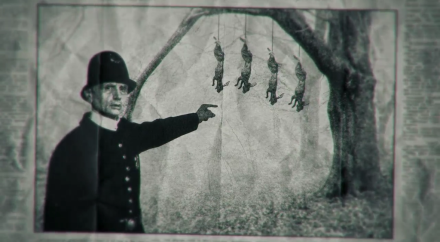 1903, Virginia. People didn’t want an insane asylum in their neighbourhood, so they were all transported to a place outside Washington, D.C. Only on the way, the patients crashed. Two went out into the forest. One of the them wound up hanging from a tunnel, a note talking about the Bunnyman. The other man, Bunnyman himself, escaped. More killings followed. But eventually, the man was run over by a train.
However, as Narrator Aaron Mahnke tells us: this story’s not true. No records about any of it, from the inmates, the asylum, to the murders. What is it about “the insane” that fills our minds with dread, as well as fills our horror stories? 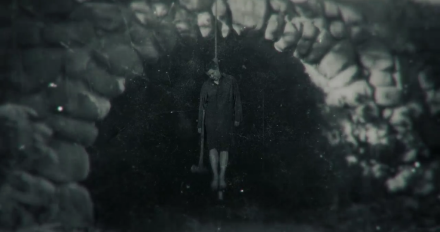 Bethlehem Hospital in Europe is one of its oldest, founded in the 1400s. At its front are statues of “melancholy” and “raving madness.” The place’s name got clipped from Bethlehem to Bethlem to Bedlam; yes, that’s where the term originates! And at this hospital, the named Bedlam came out of the torturous methods of supposedly treating the mentally ill.
In 1930, a new facility was built at Bethlehem Hospital, though that doesn’t mean things got a whole lot better. In 1946, we meet Dr. Walter Freeman (Colm Feore), who wanted to get rid of the asylum, to fix both the individual and society’s ills in one fell stroke. We see him treating a patient named Salie ‘Ellen’ Ionesco (Victoria Petrosky). She lies on a stretcher with a guard in her mouth, a bit of jelly on the temples, and then it’s an electroshock. Followed by the prefrontal lobotomy technique, also known as the transorbital leucotomy, the crude severing of nerve pathways in a lobe of the brain. Back then, it was called a cure. Except it was more like making a human zombie. Ah, modern medicine! Scientific advancement! Hope for psychotics to “return to their communities“!
At the cost of what, though?

Dr. Freeman and Dr. James Watts (R. Keith Harris) would go on running with the prefrontal lobotomy. Later, Bedlam was featured prominently in an article exposing the horrific conditions at the their hospital. Yet, on they went with that ole transorbital lobotomy, their term. A cheap, easy method that you can do right at the office with no drugs even. Yikes.
But, you see, Dr. Freeman went a bit nuts. At one point, Dr. Watts found him in the office with two of the medical picks stuck in a patient’s two eyes, like a pin cushion. We go to a scene of Dr. Freeman, his wife Dr. Marjorie Freeman (Kristen Cloke), Dr. Watts and a bunch of other doctors, as the man himself shows off a procedure he’s doing on a man named Allan (Michael Bullard).
With a sinister smile and tone, he reels off his numbers – 400 lobotomies in asylums with only a small number of deaths and other fuck ups. It’s a mad moment. One colleague protests after the electroshock, but the wild doctor goes on ahead with the procedure, and his colleague vomits at the sight. Everyone sees the ghastliness up close for themselves.
“The only thing this accomplishes is making it easier for those who are nursing them”
In the aftermath of fascism’s death and the end of WWII, people embraced the lobotomy, which sent Dr. Freeman into the stratosphere. People saw it as a way to easily take away the horror of mental illness, to calm those with the mental pain of their afflictions. So much so it reached the rich and famous, such as Warner Baxter, one of the two Best Actor recipients at the Academy Awards. He had brutal arthritic troubles and sought out the lobotomy as a cure.

His most famous case, hidden away, was Rosemary Kennedy. At birth, she suffered brain damage, severely limiting her intellectual capabilities. This led her to acting out, causing trouble. So the Kennedy patriarch went to Dr. Walter Freeman in order to remedy their problem. The procedure rendered her permanently disabled, “silenced by the age of twenty–three.”
In 1946, Dr. Freeman took his sons and a nephew camping and hiking. One son fell into the river and went over the falls, drowning, found lodged between rocks a week later. A horrible accident. Certainly did no favours for Walter and Marjorie’s relationship, either. Not that they were doing so hot before. He’s an all around terrible man, as a husband, as a doctor.
Thorazine eventually showed up to “calm patients.” It revolutionised modern psychiatric science. Of course Dr. Freeman doesn’t dig it, he doesn’t believe Thorazine or any other drug will replace the lobotomy. No, sir! At the same time, Dr. Watts wanted to give it a try, to leave lobotomy behind, accompanied with the academic work of others calling the procedure what it is: an abomination.
Cut to 1960. He’s got a patient in for the lobotomy. A little boy named Charlie, his mom can’t discipline him or get him to act like a good boy. Oh, this is ugly. He’s electroshocked. He gets the pick in the eyes. And a few years later, he was booted out of the medical practice.
So, Freeman went around the country visiting his lobotomy patients. Seeking redemption, or some affirmation he’d been their saviour. In 1972, he died. His headstone has a hole at the top, a fitting, if not eerie marking of a life with a hole in it that he was never able to fill, ultimately. 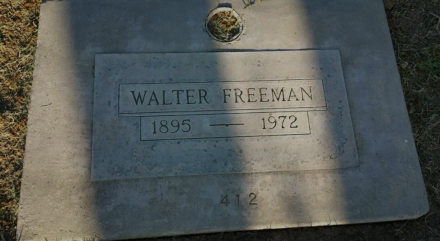 Wow. This episode was even better than the first! Love Lore. Truly, Mahnke does fine work. Really gets under your skin in many ways.
“Black Stockings” comes next.