* For a recap & review of the next episode, “Echoes” – click here 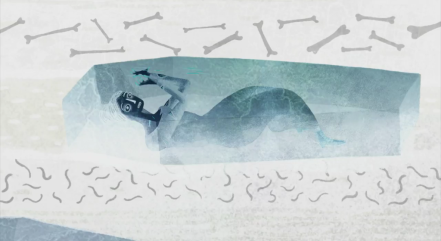 We open on an animation about 1836, Aaron Mahnke (creator of the original podcast Lore) tells us of a woman named Sarah in New Haven took in her niece Mary after her parents died. They spent many years living together, enjoying their lives, working together and spending time together. One day Mary collapsed and died in Sarah’s arms. The next day they buried her. Sarah had a dream of being buried alive. Figuring it a sign, she begged to have her niece dug up. Inside they found the girl, her hands clawed to bits from trying to get out.
A true story about a woman named Mary Hart.
Aaron tells us more about death, how “modern medicine” has changed that for us. He talks about doctors stopping the heart during surgery, machines that keep people breathing, transplanting like a riff off Mary Shelley’s Frankenstein. Today, so muc has aged, unlike a century or more ago.
“How far are we willing to go to keep a loved one alive?” 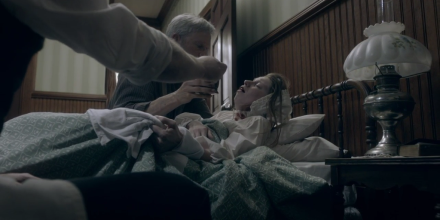 1883. George Brown (Campbell Scott)  lived in Exeter, Rhode Island with his family, a good bunch of Protestants. Young Mary Olive (Mary Simmons) is dealing with “consumption,” headed for death. He’d already lost his wife from the same thing. He prayed, hoping the rest of his children would be spared.
And for a while, they were, until Edwin (Connor Hammond) started showing signs, coughing up a bit of blood. George has heard of a place in Colorado Springs which is supposed to help, the mountain air, all that. So he has his boy sent. Only for the “phantom killer” to return again and plagued the Brown house once more.
Mahnke reminds us of premature burial, a scare back then. Because medicine wasn’t so precise. Therefore, there were techniques used to make sure a person was dead before being buried, most of it rather medieval, brief torture. There was also the “safety coffin” available, for a price, allowing a tube to the deceased, in case they weren’t so deceased; other constructions involved bells, et cetera. This is where the famous phrase “saved by the bell” comes from originally.
In a dark irony, Edwin returned to find his sister dead. Although his father was certainly happy to have him home. But tragically he soon began coughing again, sicker than before. At the same time, Samuel Wilkins (Benjamin Keepers) arrives with a man named William Rose (Steve Coulter) who claims to have a remedy for the illness. Because he claims this sickness is actually a demon. 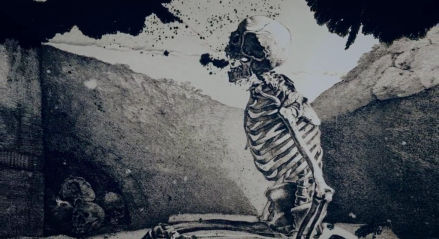 Dr. Harold Metcalf (Jason Davis) tries convincing the grieving father it’s all “Old World” superstitious nonsense; George needs no convincing. He won’t buy into it. However, Lily (Caroline Arapoglou) wonders if perhaps it’s worth a try. Again, the question returns: how far would you go to keep a loved one alive?
“Therapeutic exhumation” came out of the work of Georg Stahl, a German physician, whose work concerned many things including the concept of the soul. So, the superstitions began, working from Stahl’s shitty science mixed with folklore. Leading to people digging up bodies, checking the heart to see if a demon had taken over the body, depending on whether there was blood in the heart. If so, they had to cut out the heart and burn it. Grim.
After some time, George realises medical science hasn’t done anything for his son. In his time there was a lot happening scientifically, whereas medicine hadn’t quite took off and caught up. This is where science slipped some, folklore, its superstitions creeping into peoples heads. This brought George to indulge Mr. Rose.
They go to the family graves, they must figure out who was the demon’s original host, in order to – hopefully – stop the demon influencing the remaining family. Digging up corpses, digging up the painful memories, too. They go from the first to die to the last, discovering Mercy (Hannah Culwell) looking pretty fresh for months in the ground. This puts Samuel on edge, as well as Mr. Rose. They believe it’s necessary to check the heart to be sure, to be done with the curse.

Dr. Metcalf does the surgical work, gruesome as it was nearing the mid-19th century. “The heart is where the demon lives,” Rose tells them, waiting to see if fresh blood still lingers. Nothing looks out of the ordinary, yet they have to take the heart and live out, just in case. On the fire they go. The ashes must go into a tonic, given to Edwin, completing the ritual.
The young man doesn’t want to drink it. George and Lily convince him to try, to drink the ashes of his own sister. But did it work? No. A couple months later Edwin died. All those lengths, just to fail. Newspapers mocked George and the others in Exeter for what they’d done, believing a monster could live beyond the grave.
What monsters? The vampires. Legends begin, only to find Bram Stoker writing Dracula not much later. Mercy Brown herself became the “first American vampire.”

Super interesting start to this series! I already enjoyed the podcast a ton, Mahnke has a good narrating voice, and the subjects are so infinitely wild, weird, creepy, macabre, and always interesting.
“Echoes” is next, look forward to another unique episode.