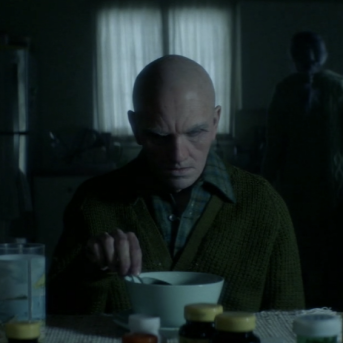 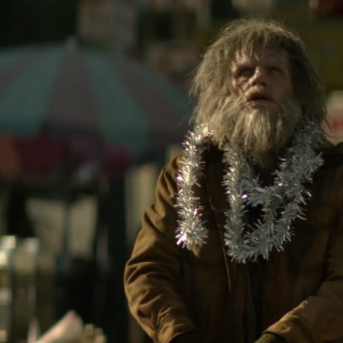 We see an older David Haller (Dan Stevens), greyed around the temples. Then, an even older David, sitting at a table barely able to grunt and groan, eating soup surrounded by medications. He can’t brush his own teeth anymore, much less anything else. Who looks after him all these years? Big sister Amy (Katie Aselton), living day in and day out with his burdens.

We get a look at David running coffee into his office. He spends his days trying to hold out the thoughts of others, an onslaught of visual and aural violence from the minds of other people. It’s hard, especially when you’ve got to listen to a bunch of idiot men, too. He winds up figuring out more than he should know, getting the attention of a businesswoman. He lets her know: “They‘re not telling you everything.” David admits to being psychic, so he then has to prove himself, which surprises her when he can clearly read her mind. It all pans out for this lady in her negotiations.

We see another David, homeless, rummaging through trash cans and yelling at people on the sidewalks. We see a different David, working in a warehouse doing mindless work and medicated heavily. Another David’s just as medicated, hearing Bryan Ferry’s “Slave to Love” being sung to him by a dancing mouse.

Again, who’s always there? His sister Amy. Always helping, always watching out. Her life, as much as his own, revolves around David’s mental health issues. These are all the possible Davids; the what-ifs and what-could-have-beens of David and his mental illness. They’re all different “timelines,” as a meth head David tells us. It’s all an allegory for him and his mental health, too: he either chooses to seize its power and control it— if he even can— or it utterly ruins him.

The early homeless version of David found himself a shopping cart. Then, he saw Syd Barrett (Rachel Keller) drive by in a car past him. He eventually became a ragged old man living on the streets. We get a nice homage to A Clockwork Orange while old homeless David gets attacked by a bunch of brutal young men. That is, until he freaks out and lets a blast of energy loose, obliterating them and setting off car alarms in the distance.

Back to the extremely medicated David, sitting at home with his headphones on. He listens to loud nature sounds to block out the voices. He’s starting to not want to take his pills. He “can‘t think” with them in his system. But it’s all weighed against the damage done without them.

Elsewhere, grey haired David is the trajectory of the psychic coffee boy, soon to be the richest man in the world. He gets a visit from sister Amy, and here the relationship is not quite what it is in the other timelines. Here, David holds power over Amy, simply because he has money, he uses his powers for ill instead of for good. In every other possible timeline, she’s his caretaker, she looks after him. And in the one where he’s successful, he mentally abuses her; and, y’know, when it’s a mutant who has a psychic power as strong as him that’s an entirely more brutal thing than normal. Might as well by the Shadow King anyway.

Armed men come for old homeless David. He’s forced to use his powers against them. They send a drone after him. It emits a loud noise disorienting him. Soon, he’s cut in half by Kerry Loudermilk (Amber Midthunder).

No matter which timeline of David there is, in the background always lurks his mental illness, the Shadow King. The medicated warehouse worker David gets grabbed by some cops on the street outside of work one night, after he starts seeing that hideous, yellow-eyed monster in his brain. Before long, cops have their guns out because Amy’s gotten in the middle, knocked over. David flings one cop into the air. He crushes the other with his psychic power. More cops arrive, and one shoots David right in the back, as Amy lies on the pavement watching.

We get back to after David tried killing himself, as he was being admitted to Clockworks. Amy didn’t want to send him, but it’s clear he was a danger to himself, and likely others, as well. It’s never tough to send someone you love to a psychiatric facility, neither is it easy living with someone with a serious mental illness, such as schizophrenia and others. Such a powerful scene when Amy sends David off to get help, not wanting to— but needing to. Because no matter what timeline, she was always going to be his rock.

So now we go further, knowing what’s happened to Amy currently, and see how high the emotional stakes have become. Because David is the reason Amy’s ended up in all of these various situations, including having her consciousness replaced by that of Lenny’s as she disappears into the void someplace.
I wonder what comes next. Can’t WAIT for Chapter 15!

Such an amazing episode, from the writing to the visuals and the various Davids/Amys. An impressive piece of television, a contender for the Best of 2018. No doubt. I love the way Legion tells stories, and that’s something, even in the supposed Golden Age of TV, many shows could learn from it: storytelling doesn’t need to be set in stone, a bunch of rules to follow, so long as you make it INTERESTING.