We see that scene in the hospital again between Walt (Bryan Cranston) and Gus (Giancarlo Esposito), after Hank (Dean Norris) was shot. This is when the Salamanca brother clinging to life perished. That is, after Mike (Jonathan Banks) slipped him a syringe full of something special.
Meanwhile, Tio Salamanca (Mark Margolis) clings to life. He’s visited by Gus, and we begin seeing more of their past. Gus is taunting the old man with all he’s accomplished, from Juan Bolsa (Javier Grajeda) being shot down to the Salamanca twins dying. It’s a method of revenge: “This is what comes of blood for blood.” There’s a deeper reason, which we’ll soon witness. For now, all we see is a pool of blood seeping into an actual pool.

Walt’s actually at the hospital in current day for a few tests. He chats up another man waiting for his PET scan. The younger man’s concerned about his health, whereas the chemist is only thinking about his meth business. Walt gives the guy a bit of advice about what he knows in regards to the struggle of cancer. “Never give up control,” he tells the man.
Simultaneously, Gus is running Los Pollos Hermanos like any regular day. He gets a call from Dt. Tim Roberts (Nigel Gibbs), asking him to come to the precinct. Also present are ASAC George Merkert (Michael Shamus Wiles), Steve Gomez (Steven Michael Quezada), and Hank. They want to speak with Mr. Fring about his relationship to Gale Boetticher. He doesn’t deny knowing him. He mentions a scholarship dedicated to a good friend who “died too young,” Max Arsiniega (James Martinez), which Gale received 10-15 years prior. Fring claims they ran into one another after Gale came looking to reconnect. A perfectly concocted story.
The others appear satisfied, though Hank’s suspicion isn’t gone. He asks Gus his real name, mentioning him being a “Chilean national” who, on paper, doesn’t exist. The chicken man uses Pinochet as an excuse— a good one, given the general was guilty of many awful abuses. Still doesn’t satisfy our DEA agent. None of it rubs him the wrong way.
Saul Goodman (Bob Odenkirk) is over looking after Andrea (Emily Rios) with an envelope of money, giving little Brock a “carpe diem” lesson in girls. The lawyer drops her payments for Jesse (Aaron Paul), mostly to assuage his guilt over what happened to the woman’s little brother. He suggests Pinkman go see the mother and son himself, but he can’t do that. Not yet.

At home, Skyler (Anna Gunn) is vacuum sealing a bunch of the meth cash with clothes. Except it’s too heavy for the closet. This means she has to find a more suitable place, such as the crawl space below the house. Right upstairs, the Whites have dinner with Schraders, as Hank’s searching for his own brother-in-law unknowingly, and the betrayals are so deep. At dinner, Walt lets the family know he’s “still in remission,” and Hank also asks for a ride to a mineral show.
But there’s no mineral show. Hank needs a ride so he can go to Los Pollos Hermanos. Good lord, what a scene! While Hank’s reeling off his story about Mr. Fring possibly being a drug dealer, Walt’s concerned his and Jesse’s actions put Gus in a seriously compromising situation. Walt gets enlisted by his brother-in-law to stick a “GPS tracker” on the chicken man’s car. All the while Mike’s in the car right next to them, too. Enough tension to fill your boots. Walt goes inside where he talks subtly across the counter about the tracking device with Gus, who tells him: “Do it.” Shit.
In the lab, Walt rushes to tell the camera the truth about what happened. He urges he has no involvement, stressing his brother-in-law’s got no direct evidence. He also promises to keep Hank in check. This further prompts him to go see Jesse at his place asking about the ricin plan, coming up with more scheming to get him close to Fring. While Jesse’s in the bathroom, Walt reads a text message about a meeting getting called off, so he suspects his partner’s not telling him the full truth.

At his desk, Gus gets a call from Mike about the current DEA troubles. He finds Hank is alone on this and risks “career suicide” by pushing the case. Nothing to worry about, so long as they cover their asses. They need to worry about the cartel instead, because it would cause worse problems if the DEA has eyes on them, even if unofficially, when shit goes down.
Fring goes to see Tio in the nursing home. He’s relishing seeing the older man in such a state. This takes us to a flashback of their shared history, when Gus was a younger man. He and his closest friend Max were visiting Don Eladio (Steven Bauer). Tio was a real nasty prick, pissing in the boss’s pool. He makes suggestions the “Chicken Brothers” are homosexuals, too. Don Eladio is much nicer to them, a big fan of their chicken recipe. Until he’s got to get talking about their big issue— drugs.
The partners were selling meth with their chicken. Or, they were giving out “samples” hoping they’d get back to the Don. They want to be in business with the big man. Gus offers a different perspective on the drug trade, suggesting a way to make the cartel more money by moving into meth alongside their cocaine business, so Mexico could have their own source of drugs rather than being “middlemen to the Colombians.”
Don Eladio starts wondering why he needs them both, if Max is the cook and Gus is just a businessman. He doesn’t like how Gus manipulated him into a meeting. Max begs for his partner not to be hurt. Although it’s him who’s shot in the head suddenly by Tio. The cartel makes clear he’s under their thumb. It’s where Gus still exists. At least for the time being, as he continues making moves in the industry. Will he get his revenge against the cartel one day? 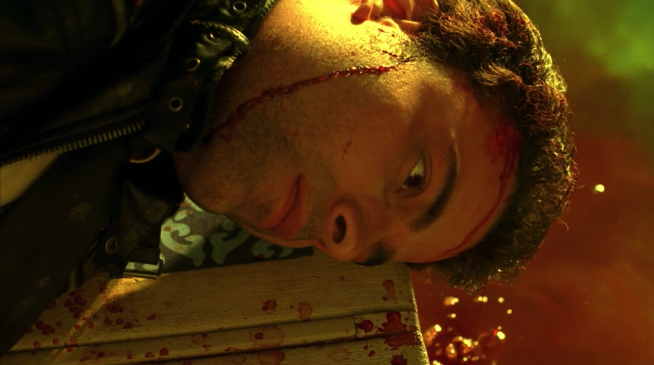 Utterly amazing. One of the BEST episodes of the series as a whole! Finally getting a look into the past of Mr. Fring is really compelling. Adds so much more to the story of Breaking Bad. “Bug” is next.