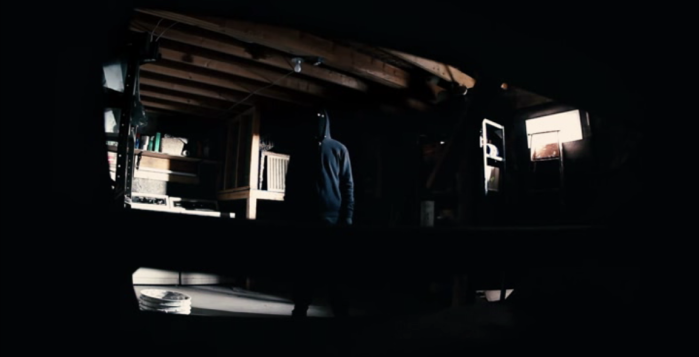 388 Arletta Avenue is one of those found footage horror movies which uses its sub-genre gimmick to an advantage, in order to make a point about how we as a society have coped with urbanism. Instead of being from the victim’s point of view as is often the case, or being a more handheld and personal-type journey with a serial killer like The Poughkeepsie Tapes, director-writer Randall Cole goes for a definitively 21st century setup to play upon suburban fears of voyeurism, not knowing who’s really in the house next to you or walking your neighbourhood’s street. The antagonist of 388 Arletta Avenue comes off as more omniscient and inescapable than many others in found footage.
What’s so unsettling is how the movie preys on our modern fears of the city, from the complacent behaviour in suburban living, to all the infiltration postmodern technologies have allowed into our daily lives by not only the government, but also our neighbours or, worse, the random person out there with malicious intent. The movie’s finale further involves the police as a repressive state apparatus, manipulated by this unseen figure, and in doing so the antagonist elucidates urban/suburban fears of ineffective institutions meant to protect us. All this fear’s distilled into the story of a young husband and wife plagued by an unknown stalker right in their own home until, sooner than later, it escalates to a disturbing length. 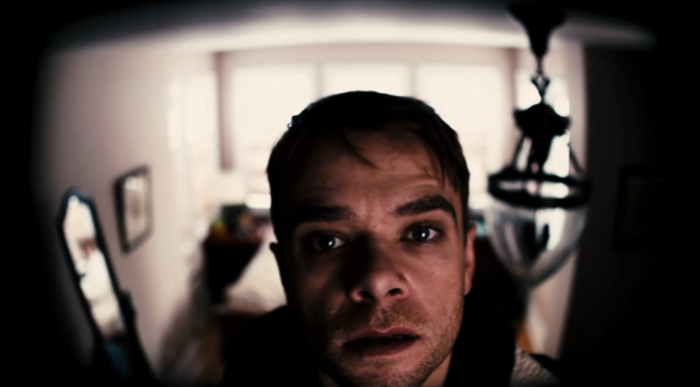 Nowadays the lengths any individual citizen can go to spy on others is extremely scary. Anyone, without license, can go to an electronics store and buy untold numbers of devices – some small as a ladybug – they can then use to do personal, undetectable surveillance on others. We begin the movie from the direct POV of someone stalking the residents of 388 Arletta Avenue, a married couple named James (Nick Stahl) and Amy (Mia Kirshner). The man sits in his car patiently watching. There’s an immediate wallop of terror when we move inside the house, discovering there are numerous cameras already placed throughout. Even the car radio’s rigged with a camera. Every room’s wired for sound and audio. The lives of James and Amy are infiltrated, their private sphere’s invaded entirely.
This infiltration’s key to the unseen stalker’s plan to drive a wedge between husband and wife. He starts with burning a CD and making the couple fight over what James knows for a fact he didn’t do, making him look crazy and getting worse as time passes. At a certain point, Amy goes missing, and this leaves James to look for her while still being taunted by the stalker.
The typical spare key left in a planter – something about 50% of families do in the suburbs – becomes more ominous here, as the stalker starts worming his way under the skin of his victims, using modern senses of complacency to build unease. This is why the movie’s unnerving for the audience, too. We know our routines, we become them in a sense. People are lulled into a complacent way of life in the suburbs— safety built up around us solely based on nebulous feelings that make us believe proximity to neighbours = actual safety rather than being an illusory effect of (sub)urbanism.
This is how the stalker keeps making James look crazier. The stalker kills his cat, then replaces it with another identical cat. Cops won’t take James seriously, though he knows for certain the cat’s different. They don’t take it too serious despite the fact the stalker leaves the original cat’s head in the mail. In addition, “The Cat Came Back” is put to use afterwards as a chilling cherry on top. There’s an uncanny feeling connected to the cat, as James knows there’s a familiar yet unfamiliar quality about it. He feels the complacency of suburbia being attacked, in turn eroding his mental state further. 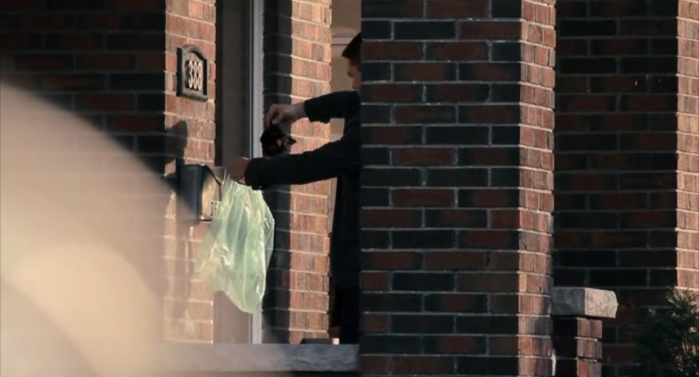 A major fear in cities is an inability to reconcile past with present. This happens in many ways. There’s a capitalist issue with the past, where capitalism requires new buildings, new workers, new products, and everything prior’s, effectively, useless. Here, the past takes on a different meaning. Cities evoke a fear of connections from the past. That’s to say, even a remote mistake from the past – an interaction with someone, a previous sin, perceived slights – can come back to evoke terror in the present. The stalker uses this fear of past connections to push James into dangerous territory.
Looking for answers as to why somebody would stalk him, James assumes it’s a guy named Bill (Devon Sawa), whom he and high school friends tortured. He takes it upon himself to track Bill down, and the situation spirals out of control. A great image of childhood – a baseball busting out a window – occurs in the midst of their encounters. However, it isn’t this figure from the past stalking 388 Arletta Ave. After a series of escalating events, James winds up killing Bill and having to bury him. His sins are compounded by a guilty conscience into even greater sins, blaming the wrong person for what’s happening to him. Par for the course in white suburbia, no?
Technology returns when Bill and the past are resurrected via cellphone. The stalker calls the police – beginning a manipulation of the RSA – as Bill, further disturbing James. Police continually see James as erratic and crazy, leading to a disturbing finale. Police – the RSA – are manipulated into killing James after Amy’s corpse is discovered in the basement, and her husband appears the culprit of her murder. James, through paranoia, has purchased a gun, and this is used by the stalker to get the cops to shoot him dead. The great irony? Cops couldn’t protect James and Amy from their stalker, and in the end the cops are the ones to kill the former.

What’s scariest is, after all’s said and done, the stalker goes back to his lair. There he keeps extensive videos of his activities, each labelled by street name. After he finishes with 388 Arletta Avenue, he moves on to a new house in a cul-de-sac amongst a typical quiet neighbourhood. He’s the unseen stranger lurking everywhere/anywhere in the city, unconnected to his victims in any form, a total stranger to everybody he stalks. This is the biggest fear of modernity+urbanism: every stranger’s a possible maniac, someone plotting, watching, waiting for the perfect time to kill you.
In a world where most murders are committed by a person known to their victim, 388 Arletta Avenue explores the modern terror of knowing a certain percentage of murder and violent crime’s still committed by total strangers. We live in cities because of convenience, for comfort, and there’s an idea of safety in numbers. People further move into the suburbs thinking there’s more safety away from the nasty, seeds areas of the city. No matter where we go in these big spaces there remains a random, chaotic, senseless horror. We may never encounter it ourselves. Some people unfortunately do. Cole’s movie is a horrifying reminder there’s such a thing as stranger danger, about which even adults should be concerned.