Capitalism knows no bounds. Mr. Pickles’ Puppet Time already had its own frozen dinners in the grocery store before any of the things that plague Jeff (Jim Carrey) currently. Perfect for the budget of state prisons. What a happy thought— a man being sentenced to death only wants his last meal to consist of a bunch of Mr. Pickles frozen dinners! This man is Joe (Dan Martin), the so-called “Wendy‘s Killer.”
We’re given a look back at happier times, when Will and Phil (Cole Allen) were showing the family magic tricks, using their twindom to full advantage. We see that Jeff was receiving letters asking he be present for the execution, a request of the killer. The family, especially Seb (Frank Langella), disapproved. But that deeply saccharine soul of Jeff, the very essence of Mr. Pickles, wouldn’t let it go so easily.
Eventually, Jeff decided not to go to the execution. An interesting revelation that tells us more about Mr. Pickles: Derrell (Alex Raul Barrios), the young man who works behind the scenes at Mr. Pickles’ Puppet Time, is the son of Joe.
At school, Phil got picked on by a kid who called his dad a “psychic paedophile,” fought back, then wound up suspended for several days. We’re starting to see the difference in relationships between dad and his twin sons— he and Will were each philanthropic by nature, whereas Phil had an aggressive rebel streak in him. Perhaps the reason Will is the way he is now is a way for him to get closer to his dead brother. And also a rejection of all the positive things in life his dad clings to, after losing his twin. 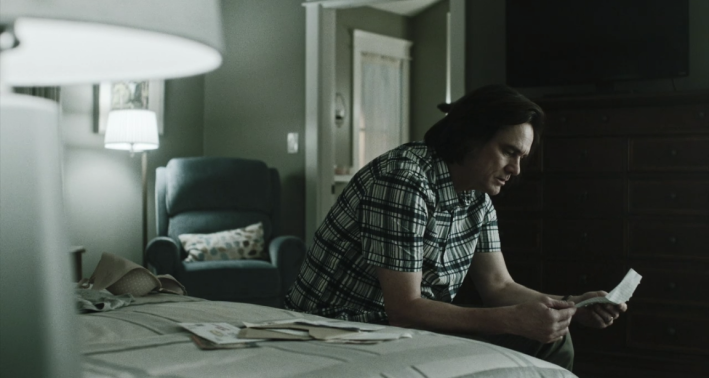 “Not everyone needs a friend” Jeff returned all the letters Joe wrote to him to Derrell, wanting him to have them. The letters included intricate drawings of the various places from Mr. Pickles’ Puppet Time. The son looked through them, building a map on his wall of the artwork his father created.
At a restaurant, Jeff and his family sat for supper with Derrell and his mother Latrice (Karen Malina White). They talked about briefly about Joe, though Jill (Judy Greer) steered conversation away, until Phil began talking about a meme featuring the Wendy’s Killer and other “mass murderer“-type shit. This prompted Derrell to talk about the circumstances that led to his father essentially losing his mind, before snapping in that restaurant. “We don‘t live how you live,” the young man explained. Phil corrected Derrell’s grammar, which sent Jeff into a quiet rage at his boy.
In prison, Derrell asks his father why he latched onto Jeff. The kids’ show entertainer was the only person to respond to his letters, out of him, Charles Barkley, and Bill Clinton. They began a pen pal relationship, and in a way it likely gave Joe hope, having someone as religiously positive as Jeff thinking about him.
Then came time for the execution by lethal injection. Joe’s last words couldn’t be heard due to the microphone being broken. Everybody present watched as he was put to death, the needle inserted into the arm with one of Jeff’s puppet characters inked onto the skin. Jeff smiled at Joe one last time, as the killer smiled back.

In a diner, Jeff sat wit Derrell. A waitress tells Mr. Pickles whatever he orders will be name after him by the cook— this subtly shows how he’s constantly thinking about others, not himself, when he decides on a salad instead of franks n’ beans, just in case “kids order that” because his name’s on it. Derrell thanks Jeff for his kindness, then they talk about the “breaking point” every person has inside them as the young man searches for answers in relation to his father’s crimes. This led him to a job at the studio, welcomed with open arms by the crew. Also a way for Derrell to avoid slipping into the cycles that ultimately consumed his father, offering him a way out.
A tragic moment shows us Phil was likely not wearing a seat belt during the crash that later killed him because his dad was always telling him to wear one. Probably made him not want to wear one, even in the car with mom. All comes full circle.
And in that last moment where we saw Jeff freaking out in his office during the previous episode, he’s picked up off the floor by Derrell— the kindness, just like the pain, comes full circle, too.

Another amazing episode, and one of the best yet. Kidding has provided such a beautiful, open outlook on life through the lens of a dark comedy that it’s impressive. Not to mention the gorgeous cinematography to compliment the subject matter/themes.
“LT. Pickles” is next time.