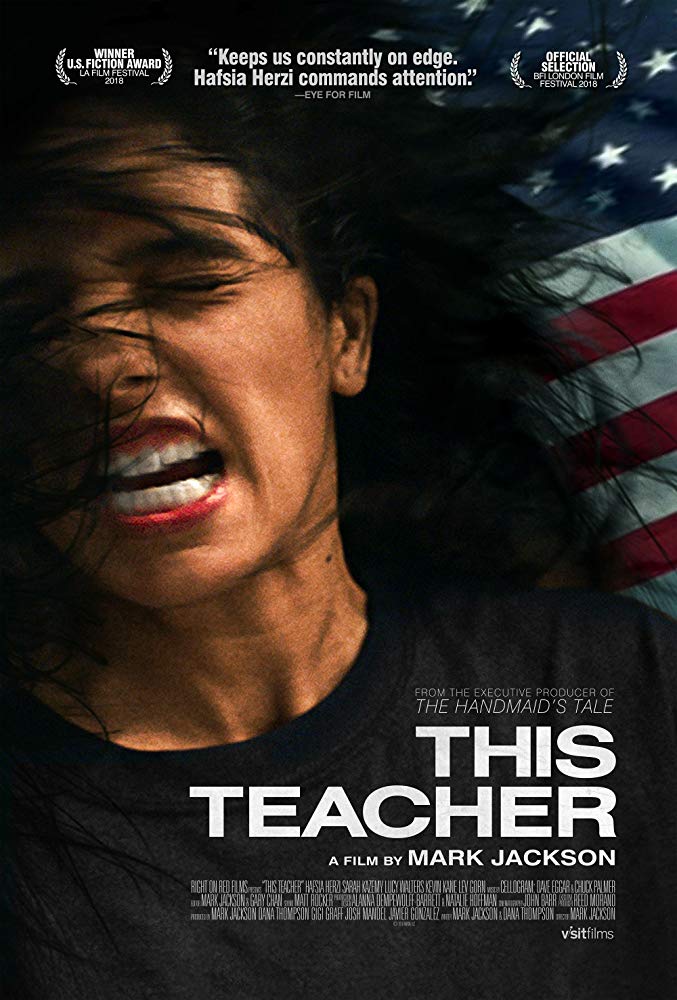 There are plenty of films out there already, and more coming out, that present themselves as commentary on Trump’s America. There are also films that came out in the midst of the election or immediately after (Get Out, Lowlife) already preparing to say things about America, only aided by the country’s descent into dangerous, thriving pockets of white nationalism under President Agent Orange.

This Teacher is an uncomfortable piece of cinema in an appropriate sense. Director Mark Jackson and co-writer Dana Thompson tell the story of Hafsia (portrayed fearlessly by Hafsia Herzi)— a French Arab woman who comes to New York City to visit her friend, only to find the vacation spirals into an eventually dangerous nightmare.

This film fits with Sebastián Silva’s recent feature Tyrel, which illustrated a racial nightmare from the POV of a young black man surrounded by white people at a party in the Catskills. Both these films confront casual racism by presenting the perspectives of POC and showing how many perceived liberal people actually, sometimes unknowingly, harbour racial fears and resentments behind a thin veil. Throughout This Teacher, Jackson and Thompson lift the veil showing us the hidden face of many who’d love to believe themselves progressive when they’re merely small cogs in a much larger wheel of systemic racism.

The biggest, best contrast to Hafsia is her friend Zahra a.k.a Sarah (Sarah Kazemy). These two women come from the same background, yet they’re vastly different people. Sarah’s an actor who believes she’s changing the world through her roles, which is hilarious because of the lines we hear her reading through from a bad script early on, and she’s the type of liberal person who thinks doing the bare minimum as activism allows her superiority over others.

The most telling moments with Sarah involve her self-hating qualities, the racism that’s so ingrained in her psyche she turns it inward. For instance, she makes a racist joke about why Hafsia’s in America, at once playing on white gullibility by suckering in a Caucasian friend at a party, and simultaneously denigrating a serious issue like honour killing with such a who-gives-a-shit attitude. She tells her white husband Hafsia “stinks” of home— the use of smell here isn’t innocuous, given racists often use the tired trope of ‘immigrants stink’ as a typical insult, and while Sarah’s not racist, being a French Arab herself, she’s playing into the racism of the Western world in which she exists while melting into Westernised erasure.

The prominent aspect of Sarah’s life in this regard is the fact she goes by Sarah rather than her given name Zahra: “It‘s easier.” Even her husband calls her Sarah, not Zahra, because it’s inconvenient for white voices to say a name with which they’re unfamiliar. This an overall reflection of an immigrant’s experience in the West, always having to accommodate white people to their perceived Otherness while us white people get off with doing little to no work.

A dichotomy of white tolerance comes out vividly, and hideously, in the juxtaposition of two particular scenes. The first is when Hafsia meets the couple at the cabin, Rose (Lucy Walters) and Darren (Kevin Kane). While Rose talks about her husband losing a loved one during 9/11 being the reason he became a policeman, she doesn’t make it uncomfortable like a racist would, or a liberal trying to be so self aware they begin folding over into semi-racism. But Hafsia is briefly uncomfortable, because she hasn’t identified herself as a Muslim, only French, and she knows deep down the mention of 9/11 would’ve been treated differently had Rose known Hafsia’s Muslim.

This moment doesn’t come into stark focus until a scene during the film’s climactic moments, when Hafsia’s drinking with Rose and Darren at their cabin and reveals to the couple she’s an Arab Muslim. Their entire body language immediately alters, as if a switch was turned off, and the unease is clear on their faces. Hafsia sees this and challenges it, sick of being treated by white people with suspicion whether it’s on the bus in the city or a cabin in the middle of the forest. She puts on a makeshift hijab before pretending to fire off an assault rifle and toss a grenade. Everything devolves into violence nearly verging on fatal when Darren’s hysterical white worldview is convinced Hafsia has a bomb in her bag. Almost hilarious, if it weren’t for the fact Darren— a cop— pulls his gun, driven so deep into racial paranoia he’s able to convince himself this Muslim woman’s chosen to commit a suicide bombing at a quaint cabin in the woods— no matter the place, the fact Darren’s willing to pull his gun on an unarmed Muslim woman is damning enough. All Hafsia had to do was joke a bit and the thin membrane keeping the couple’s racism at bay is obliterated.

“It’s not all dark in your heart”

The film as a whole can be seen as an allegory for the immigrant experience in America, though specifically geared towards the Muslim experience. What Jackson does is frame Hafsia’s journey in the way of the life of a saint. None of this is especially focused on religion itself, rather it’s a secular view of faith: we can become one, a world without borders, if only we can LOVE one another. This is the way Hafsia feels inside, in spite of all evidence suggesting that love is hard to draw out.

During one scene, she sees herself in the forest as a part of nature, suggesting there exist no borders between us and nature, and in turn none between any of us either. And it’s in this sense the mythology of the Catholic saints comes into the picture. Jackson presents the film in three parts: (i) Early Life, (ii) Apparition, and (iii) Gospel. This isn’t some way for Jackson to fetishise the Muslim experience. He’s not saying that simply by virtue of Hafsia’s being Muslim she’s automatically up for sainthood. What Father Gore sees as the message, personally, is that the Western world forces Muslims, and immigrants in general, into a position where they have only two options: sainthood and martyrdom (figuratively, of course).

A brief shot of Hafsia hanging from a noose— similar to a threat from Rose following their night together crumbling into resentful white anger— shows the potential for martyrdom, either out of self-destruction or being destroyed. But this is a nightmare image, and soon Hafsia wakes. She chooses to not let a White America destroy her in any sense. She chooses to turn the other cheek, choosing sainthood. Her last line defines this when she says to herself (re: the white couple): “I love you, too.” Rather than let the hate of others define the way she lives her life, Hafsia extends love and forgiveness to those who hate her and continues the saintly mindset of living without those borders of hate atrophying her heart. There’s a sadder lining to this, as well. It’s the onus we place upon Muslims, and immigrants, in the Western world: to take the brunt of white abuse and learn how to accept and deal with it without letting it destroy them completely, one way or another.

This Teacher is more subtle than overt. Because of that some viewers might feel the story never ultimately gets anywhere. Chances are this might be the case for many white viewers. Father Gore’s a white man himself, so it’s only honesty— not all white people will react well to this, nor will many of them even see the nuances that propel Hafsia’s journey through an intolerant, resistant Western world.

Jackson’s film is a sympathetic portrayal of a Muslim, and a Muslim woman at that. So many films and television shows (looking at you, you racist mess Homeland), even those feigning sympathy, portray Muslims as terrorists, potential terrorists, or the ‘good’ family members/citizens connected to terrorists. We need more honest looks at real Muslims in fiction. It isn’t only representation in terms of casting that matters. We need to see more stories about and featuring Muslims in the mainstream. This may not be to everyone’s taste. It might also make some white people uncomfortable while they watch. But it’s an important, powerful, and emotionally driven film perfect for 2019.

If there’s a single standout image it’s the shirt worn by the man who runs the cabins where Hafsia stays. His shirt says LIBERTY over the left breast. In a scene with the couple later, Hafsia mentions the diverging ideas of liberty between France— where the French Revolution changed history’s course— and America— where people don freedom as part of an aesthetic they don’t fully, if at all, put into literal practice.
America’s going through an ugly period. When angry white boys in red hats are terrorising people of colour on a near daily basis using a symbol directly linked to the current POTUS, this t-shirt’s image evoking the concept of liberty is a poignant view on just what the term means to different people – as if it’s meant to have more than one meaning – and who exactly freedom pertains to when America dubs itself the Land of the Free.