State trooper Yuka Mongoyak (Jill Teed) is driving under the Northern Lights. The guy in her backseat— her brother Jack (Patrick Gallagher)— doesn’t dig Christmas, or any of the colonialist nonsense perpetuated across the world “everywhere they show up.” We’re near a small town, Iglaak, in Alaska— the word ‘iglaak’ is Inuit for traveller or stranger.

At the station, everybody’s having a drink. Captain Lane Pendleton (Greg Kinnear) commands the room to get everybody in the spirit. Jack’s welcomed in his cuffs as Yuka brigs him through to the holding cells. Pendleton goes on about “bears and Eskimos” being the only thing there before the white man arrived to “tame” the wilderness of the New World, before the 49th state was declared as Alaska. Bit of thinly veiled racism on Christmas Eve. Tradition, right?
Not a thrilling holiday for Yuka. The party’s a chance for the captain to toot his own horn and revel in his yearly ‘pardon’ to a stranger. Yuka goes to fetch Jack so he can be pardoned. She finds him asleep. She also finds an actual Stranger (Steven Yeun) sitting in a cell nearby. Who put him there? He says he’d “like to be pardoned,” just like her.

Pendleton wonders where Yuka’s gone and he goes down to see what’s happening. He meets the Stranger, equally as confused as his trooper. The stranger says he came from the North Pole. His shoes look… strange. He claims to be an “extreme tourist.” He legally changed his name to “A Traveller.” He’s come specifically to be pardoned by the captain. Pendleton’s narcissistic + dumb enough to believe people around the world would know about him. The cops get a look at the stranger’s phone— a “Russian design.” It’s a peculiar object they don’t quite recognise. The captain doesn’t think much of this guy, but Yuka remains suspicious.

Despite Yuka’s concerns she has to let the stranger out to be pardoned. The party welcome the stranger while the captain goes on running his mouth about the guy’s YouTube channel and their suddenly ‘cool’ town. A Traveller busts out his strange device, recording as he introduces Cpt. Pendleton. Meanwhile, Yuka checks into his identity but finds nothing at all. The stranger speaks to the others about being on the Trans-Siberian Railway. He pumps up Pendleton and the entire town’s ego saying North Koreans told the Russians that Iglaak and Cpt. Pendleton would stand in their way if they ever were to attack America.

The power goes out while everybody’s having fun. People get angry when the festivities stop, beginning to turn on each other. When the lights come back, everybody’s fine again. There’s going to be a two-for-one pardon tonight considering Jack’s still in his cell. But the stranger says that’s not a good idea. He claims Jack has stolen a good deal of equipment from the station’s snowmobile shed. Pendleton orders someone to check on it, choosing to believe the stranger in their midst rather than trust in Yuka’s suspicions. A Traveller knows things about the town and everybody in it. He reveals the inner lives of those around him, from “delinquent child support payments” and secret alcoholics to the mayor’s allegiance to a “Russian company.” People fight again, and the place is all but erupting in violence before the cops break everybody apart. Party’s over. 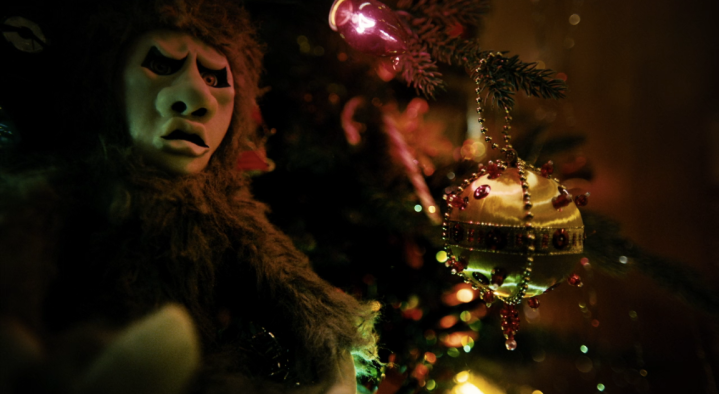 Cpt. Pendleton and Yuka sit the stranger down, questioning him. There were no stolen tools found in Jack’s car after all. Regardless, how did he know all about the townspeople’s secrets? He then claims to be Special Agent Douglas Hayes from the FBI’s Anchorage branch. He’s undercover, supposedly, to root out the corruption in Iglaak. While the cops try to confirm this, they put the stranger back in his cell.
They leave for a minute. When they go back they briefly witness something weird in the dark. Jack and Pendleton think they saw “an antennae” come out of his head. The stranger talks about the power grid connected to the air force base nearby, and what could happen if a “hostile force” invaded. He suggests Pendleton sold info to the Russians. After another while longer, the stranger says he’s yet another person in the federal government, shifting identity once more.

Which of his statements are truth? Which are lies?

Pendleton rushes off to the location he gave up to the Russians. While the stranger’s alone with Yuka, he tries to ingratiate himself to her. He knows people like Pendleton don’t care about her “land” or her “people.” He’s sure she’d be happier being the boss in Iglaak. The cell opens up. Yuka keeps her gun drawn on him. She’s realising she could’ve stopped this all along. She’s let things progress to this point because part of this was going to take down a bit of the colonial power operating in Iglaak. She didn’t think about the fact that it was built on lies, and even work done in the name of good isn’t technically good if done without morality and honesty.

Yuka calls to Pendleton advising him not to go to the shed’s location. He ignores her calls turning off his radio. She chases him to the shed, pulling her shotgun and putting him under arrest for his crime. Pendleton tells her: “It‘s only a lie if we choose to believe it.” In the sky above them they watch spaceships flying, surrounded by the Northern Lights. Back at the station, Jack gets his piece of pie after witnessing the stranger become his true self. They sit for a slice and Jack welcomes the new leadership of his alien overlords.
Can’t be that much worse than what white people have done, can it?

Is throwing away one’s ethics worth beating part of the system? Is defeating the enemy worth losing ourselves over? “A Traveller” asks these questions through the context of Yuka and her struggle to both rebel against the colonialist patriarchy and also operate/thrive within its strict boundaries.
Another relevant episode, given the Russia talk, the ravages of colonialism we’re all experiencing today. For those of us on the left of the political spectrum, it’s often a case of ‘the Left’ being willing to accept any form of defeat over ‘the Right’ and, sometimes, losing their sense of right v. wrong in the process.

Other viewers can feel how they want— Father Gore thinks it’s high time people of colour have a Twilight Zone of their own, to reflect what’s often not a future reality but a current one, and if white dudes don’t find that interesting then too bad. Peele has done a fine job of producing stories that come from this place. Similar to his mission to not worry about casting white leads in his movies, opting to give POC a chance to shine they’ve been deprived of by big studio producers/filmmakers, Peele’s Twilight Zone won’t appeal to whiny white people. There are also others who simply don’t dig the series, and that’s fine, too! To each their own.
For this critic, the show has been doing great work so far.
“The Wunderkind” is next time.