State Trooper Yuka has to deal with an eerie stranger in her tiny Alaskan town on Christmas Eve.

The Yule log goes out at the Spellman house, bringing holiday terror to the witches.

An out of work actor gets the gig of a lifetime, only along with money it brings a horrific crisis of identity.

Nick goes to see Amanda. Meredith receives a message from Blue. Smoothie meets Hailey and the other children.

One of my favourite of ALL-TIME opening scenes on this show comes in “Unholy Night”.
Starting out on a snowy Christmas eve in 1962, a Salvation Army Santa is out front of a store collecting donations, ringing the bell. All of a sudden, Leigh Emerson (Ian McShane) shows up. He shoots Santa.
Cut to Leigh, dressed up in the suit, playing with a train set in a family’s living room. A little girl meets him there, as he plays friendly; though, there’s a tell-tale stain of blood down the front of his white trimmed red coat.
The most terrifying wake up ever? Santa Leigh has the little girl bring him up to mom and dad, greeting them for an early Christmas. Downstairs he ties the mother and father up, taunting them terribly. An awfully terrifying scene as McShane just goes SAVAGE, mostly with his words. All before putting a bullet in the scared and pleading couple.
I love, love, love Ian McShane. He’s great in everything, especially on Deadwood as the surly saloon owner Al Swearengen. Here he plays a downright unsettling, shocking character who’s good for every last second he winds up in the frame.

Sister Mary Eunice (Lily Rabe) changes the rules now that Sister Jude (Jessica Lange) has been dismissed. It seems Christmas is back at Briarcliff. She has all the inmates line-up, improvising ornaments for the tree; quite a macabre yet funny scene.
Dr. Arthur Arden (James Cromwell) is having a bit of a hard time quelling his feelings for the devilish yet oh-so-innocent Sister Mary Eunice; something that’s been apparent from the start. Perhaps it’s because Arden has a fetish, maybe it’s something he’d rather subject the darling nun to because he feels something for her.
At the same time, Frank McCann (Fredric Lehne) is mourning the death of Grace Bertrand (Lizzie Brocheré), one which he caused inadvertently when she jumped in front of a bullet meant for Kit Walker (Evan Peters).
Loving the first big confrontation between Sister Jude and the devil inside Sister Mary Eunice. She sneaks up behind the demon, putting a blade to the young nun’s throat. But before much else happens between them, Arden shows up. They have Jude escorted, however, there’s no doubt each of them have their own ideas about the problem now presenting itself. Arden warns not to underestimate the older Sister Jude.
Now Sister Mary Eunice goes to see Emerson in his cell; he’s now an older, bearded, lost soul in the darkness. At the same time, a flashback comes from 1963 during a Christmas event at Briarcliff. Leigh causes a bit of trouble for Sister Jude. When a photographer comes in to do some pictures, Leigh takes his chance and bites off an orderly’s face; or, parts of it.
In present day, the devil in Sister Mary presents Leigh a Santa costume. She knows all about him – how he’d been jailed for stealing a loaf of bread, there on Christmas five men, the jailers, raped him. This is what precipitated his Santa-centric killings. She wants Leigh to put the costume back on, have a little fun on that special day near the year’s end.
What’s in store is sinister.

A particularly grim scene between Dr. Arden and Sister Mary Eunice, which I can’t get enough of. He gives her a pair of ruby earrings belonging to a “jewess“, as he puts it. She would hide them, swallowing each one every day so they would not be stolen by the Nazis in the camps. Eventually she died, Arden retrieved them. He says that Sister Mary Eunice is worthy of their beauty.
Sweet? Strange? All of it?
Arden was in fact hoping for “a glimmer of that precious girl.” But the devil in Mary has no time for his sweet, saccharine lovey-dovey bullshit. In so many words, she tells the doctor to get moving or get out of the way.
Mother Superior Claudia (Barbara Tarbuck) is a trusted friend of Sister Jude. She’s not sure what to do to help, however, she is always there. Jude seems a little more clear, while certainly a bit revved up and panicked, but we know she has SEEN the devil, she knows where the devil resides. Luckily the passion in Jude convinces Mother Superior to help her.
Then out of nowhere, Arden shows up at the church where Jude is meeting Claudia. What we’re seeing is a plan slipping into action: Arden is convincing Jude to come back and help with Sister Mary Eunice, and while it seems he wishes to make amends, a little anyways, there’s no trusting a former Nazi doctor out of Auschwitz.
Back at Briarcliff, Monsignor Timothy Howard (Joseph Fiennes) praises Mary Eunice for having the innovation to dress the Christmas tree with impromptu decorations. Leigh is dressed up, full Santa, whispering naughty nothings into another inmate’s ear. Even Dr. Arden seems to be having a slightly decent time.
Will it last? And for how long?

Kit is having dreams of Grace and Alma (Britne Oldford), their faces interchanging between one another in his head. He’s asleep in a bed at the asylum. Next to him – Lana Winters (Sarah Paulson), who finds herself adjusting once more to life back inside the horrid walls of Briarcliff Asylum. She talks to Kit as he sleeps, finally coming to understand his true situation after Dr. Oliver Thredson (Zachary Quinto) revealed himself to be Bloody Face.
I find this part super interesting because there’s a new dynamic between Kit and Lana. She knows for sure what Thredson did and she’s prepared to fight. Luckily for Kit, Lana is a true survivor. However, soon enough she’s got to deal with more than simply being back at Briarcliff.
Oliver shows up again, without the Bloody Face mask. Uh oh!
Disturbing as his character may be, I do think Arden is one of the most interesting to me.
He’s letting Sister Jude in incognito, via the bakery. She tells him to bring Mary to her office and lock the door. Jude believes she and Arden are in cahoots.
Is this really the case? I feel as if not.
Upstairs in the recreation room, Frank McCann places the star atop the Christmas tree, but Leigh tosses him off the ladder attacking him with an ornament. McCann lays into Emerson a little and then goes to haul him off to solitary; clearly the Santa suit was not a good idea. Maybe it wasn’t… for anyone else except Arden and Mary Eunice.
Because while Frank brings the nasty Santa down to a solitary cell, Sister Mary cuts the guard’s throat while Leigh looks on with a laugh and a smile. 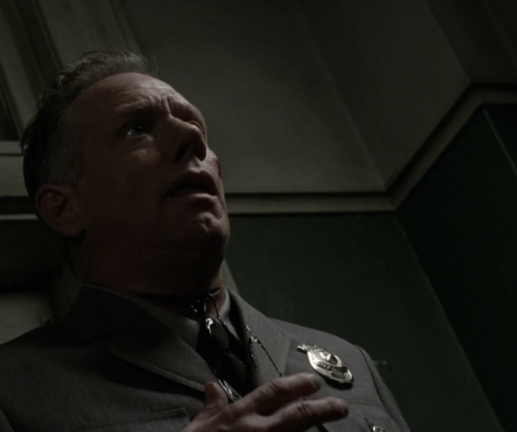 It’s all led to here – Jude is put in a room alone with Leigh, Santa suit to boot. He says he’s there to “open his present.” IT WAS ALL A PLOY! As I knew it, Arden merely wanted to show how he was on the devil’s side, for the that sassy demon inside the young nun.
Absolutely creepy, chilling scene between Ian McShane and Jessica Lange. Two world class actors showing off their chops. It’s a disturbing scene, as we’re sort of waiting to see what exactly is going to happen. This made me truly worry for Sister Jude – watching on in horror wondering what Leigh Emerson would do to her.
Paralleled with their confrontation, Oliver tells Lana all about how he scoured his home for any evidence, making sure it was all gone; he ‘killed’ Bloody Face, so to speak. This is another tense, suspenseful moment. There’s these two tough women in peril and I honestly could not tell what would happen next. Great writing and execution to have these scenes playing back to back!
Though I give a good scan of everything happening, I’ll leave these NASTY TASTY LITTLE BITS for you to watch on your own.
Needless to say, though, the last ten minutes of this episode are pretty damn incredible. One truly excellent and bloody moment comes quick during the scene with Lange/McShane; gnarly!
Dr. Arden finds himself in the path of the alien creatures which have visited both Kit and Grace. All of a sudden, as he brings Grace through the tunnels below, they come and take Grace into the thin air, vanishing. This is going to be something to watch closely because I love how they’re including the Nazi doctor in with the alien subplot; anyone who knows anything about Hitler and the Nazis knows they were into some weird stuff, so Arden is bound to be very intrigued, wanting to find out all he can about these creatures. Kit will play more and more into this now, especially seeing as how Grave has disappeared without a trace and the doctor will need someone in order to find out more about them.

The next episode, “The Coat Hanger” directed by Jeremy Podeswa (True Detective Season 2’s “Down Will Come”, The Pacific, The Walking Dead, The Borgias), is one of my favourites from this season, as well. Very brutal and macabre and extremely fun in a horror type way!
Stay tuned, horror fiends. Come along for the ride.