The group have survived the storm, now they’re meeting a new face, Aaron (Ross Marquand). Everyone’s automatically suspicious when Maggie (Lauren Cohan) and Sasha (Sonequa Martin-Green) bring him back to the barn to meet Rick (Andrew Lincoln). The former asks about the supposed “audition” they’re meant to do in order to get into his community. Aaron says he goes out on the road to get people to go with him back there. He’s brought pictures. The first one shows walls made of fortified steel, framed with beams. They remain sceptical.
Rick punches Aaron out cold instead of listening to him talk any more.

Michonne (Danai Gurira) doesn’t dig the way Rick’s decided to go on the offensive. They search Aaron’s pack, finding a flare gun. The knocked out man comes to again, not even mad. Rick is convinced the flare gun was to signal his people and start an ambush. Aaron tells them about leaving the bottles of water in the road. He’s been watching them a while. He’s impressed by them: “You‘re survivors.”
Aaron offers to drive them to his community for proof. Not everybody is on Rick’s side. Michonne and Maggie want to at least give this idea of a potential permanent home a shot. A bunch of them will go to confirm Aaron’s car story.

This leaves Rick alone in the barn with Aaron. He keeps on trying to talk about how the group seems like “good people.” It’s not even small talk to the former sheriff. He says if his friends don’t come back in an hour Aaron is dead. Also, another word for zombies: “roamers.” When Judith is hungry she starts crying, which worries the hostage, so he offers apple sauce in his pack. Rick will only give it to Judith once Aaron eats some first.

Out on the road, Glenn (Steve Yeun), Michonne, Abraham (Michael Cudlitz), Maggie, and Rosita (Christian Serratos) head for the vehicles. Someone out there’s watching. The crew find the RV and another car. Abraham and Rosita have brief time alone, when he worries about his behaviour back at the firetruck. She tells him: “It‘s not you.”
The crew head back. Michonne says they’ll go to the community. Everybody agrees. Aaron will only give up so much of the route, not fully willing to trust 100% when he’s been asking them to trust him wholly. Things may get a bit dangerous because they plan on going under the cover of night. Nobody understands Rick is simply trying to protect everybody. They’ve been to Woodbury, they’ve been to Terminus, and they walked right into those communities without much thought— how did that turn out?

The group head out once night falls. Aaron shows Michonne a picture of his “own house“— a luxury in this post-zombie apocalypse world— and she notices there aren’t any pictures of people. She asks him their prerequisite questions: how many walkers he’s killed and how many people / why. They also see Aaron has a device he’s used to listen to them. Right as their concern brews, Glenn drives into a bunch of walkers they couldn’t see until it was too late. He keeps driving through them, mowing body after dead body, splattering the car with gore. They can’t find the RV behind them, so they have to circle back. Except the car won’t start again, and more walkers are coming.
In the distance, a flare goes off. “This is over,” Aaron says. He kicks open the door and starts running into the woods with Michonne, Glenn, and Rick on his trail. They get separated and Glenn’s nearly bit, managing to smash a walker’s head into a rock to get away. They all regroup and head through the woods together once more.

Everyone reunites. Aaron finds his partner Eric (Jordan Woods-Robinson) with a busted ankle. Eric brought license plates, which Aaron likes to collect. He’s introduced to Rick. The fearless leader starts to get insight into Aaron’s life. Because of what they did for his man, Aaron is indebted to them. He tells them the name of his community, Alexandria. They all agree to leave in the morning.

The next day, they’re off. From the road, they see Washington. Ross talks about a “gifted surgeon” in his community. Lots of promise ahead. Abraham tries to be optimistic for once and gets a kick in the nuts when the RV’s battery dies. Good thing Glenn knows there’s backup batteries stored inside. Michonne talks to Rick about how “the fight‘s over.” If Alexandria is for real, they can “let it go,” at least a while. There are many modes of existence. Perhaps now they can gear down to something less survival, something like actual living. Yet Rick remains cautious, always. He hides a gun nearby before they go to the gates of Alexandria, just in case.
And then they arrive at the gates.
It isn’t silence Rick hears, it’s the sound of children playing, of people’s voices— of safety. “Even though you were wrong,
you were still right.” 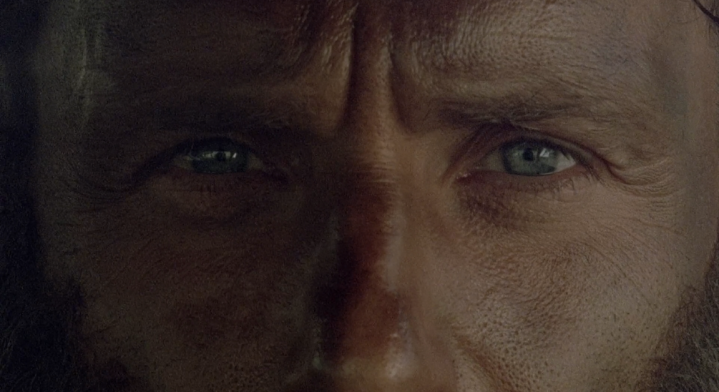 This is a great turning point in The Walking Dead. There are new things on the horizon. But, as always, there will also be new threats along the way, too.