We get a look at the infamous Pickle Wigglers fiasco that Seb recently made reference to, as a couple kids in a commercial go nuts over the Best-O’s cereal their mom bought. It’s 1993, and we cut to a grocery store where people are swarming to get more boxes of cereal. We find out it was sooo popular because the Pickle Wigglers vibrated and made the perfect toy for mommy to have some alone time.

In the aftermath of what occurred in the Philippines, Jeff is nowhere to be found. He’s gone AWOL. Meanwhile, Deirdre’s bought herself a vintage box of cereal so she could play with a Pickle Wiggler. Only problem is she loses the pickle dildo inside herself. She’s got enough to worry about with Jeff running off, having lost his “Pickle Family.” She confronts Seb about their relationship, finally realising the truth that her dad would’ve preferred just one child. Probably should’ve realised that a long time ago. Later, she has to call Jill to help her remove the Pickle Wiggler from her vagina. We get a glimpse of where Jeff’s been. He’s pretending to be a bartender named Larry in a fake bar, acting like it’s the 1960s all over again. It’s an elaborate ruse as part of some kind of experiment run by Cornell (Tyler Okonma), who specialises in “quality memory care” as therapy for people with Alzheimer’s and other similar illnesses. He’s been ignoring Deirdre’s calls and texts, seemingly ignoring his real life. He gets ‘fuck you’ texts from his fellow Pickles, too. At the same time, Seb’s worried about his recent “momentary inability to speak,” so he and Maddy head to the doctor. The doc explains he’s had a minor stroke and could have a major one.

Jeff spends more time with the old people, helping one gentleman tie his tie (“Who the fuck are you?”) and dancing with old ladies in the fake bar. He and Cornell both feel that lying is beneficial so long as it’s in service of these people who are struggling with their minds’ collapse. He tries to talk with Louise (Annette O’Toole), who’s sitting on the fake bus bench, waiting for a ride that’ll never come. He talks to her about Niagara Falls, thinking of his own mother.

At the hospital, Seb sees a woman who looks just like his first wife. She looks exactly like Louise at the bus stop, as well. Hmm. Projection much? Maddy forces Seb to go speak with the lady. He asks the woman to go for a meal with him, and she accepts. They go for a dinner date, figuring out quickly they have quite a bit in common. Well, things aren’t exactly as they seem. The woman’s not a woman, but one of those actor-therapists like Cornell employs. Simultaneously, Jeff talks to Louise about his many, many family and emotional problems. Perhaps both Seb and Jeff are getting what they need, albeit in entirely different ways. 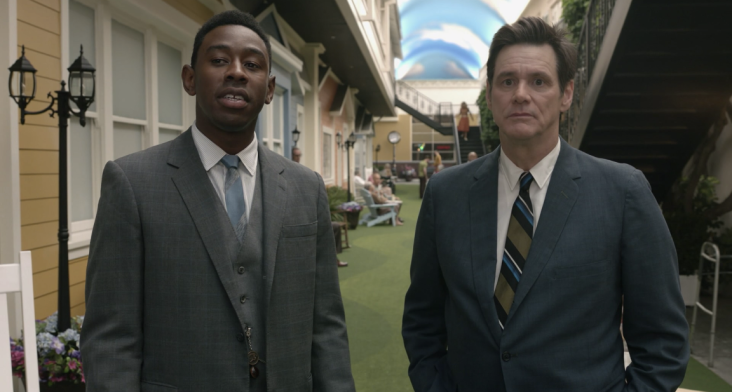 For his part, Jeff realises he can’t keep living every single day like nothing has changed, like the people at Cornell’s clinic. He’s starting to maybe turn a corner, to see the light. He’s understanding his family is more important than a fantasy. But is it too late?
Another great episode! We’re almost finished Season 2’s glorious run.

“A Seat on the Rocket” is next time.