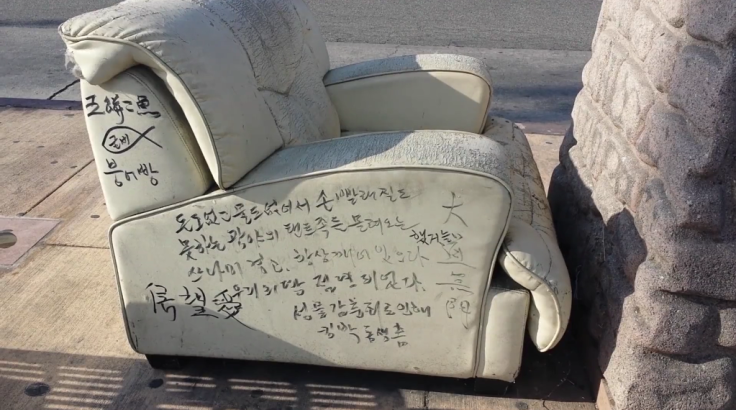 Although Murder Death Koreatown is nothing like The Blair Witch Project it captures some of the latter’s viral marketing glory by truly making it ambiguous whether what we’re seeing is real. The film has no director or writer listed on IMDB, no cast listing, either. For all intents and purposes, the film attempts to pull us into the belief that the events it depicts are actual found footage belonging to the protagonist.

The story follows a man whose neighbour is murdered by his wife. The crime scene extends from a nearby house down into the alley next to the man’s apartment. This leads him to start an investigation of his own after he gets no answers from police or media. He begins looking into the murdered neighbour and the wife. He soon believes there’s a sprawling conspiracy involving Korean landlords and a bunch of street preachers.
But is his investigation sound? Or, is it a sign of a decaying mind?

Murder Death Koreatown is tense, weird, and occasionally darkly comic. The story is creepy enough. There’s also an interesting argument within the film’s events and themes that point to a focus on true crime culture and, specifically, the role white people play in that culture when the victims are people of colour. The protagonist starts as an unemployed man seeking answers about a murder that hits literally close to home, then gradually devolves into a paranoid conspiracy theorist whose ultimate fate is as mysterious and troubling as the case he’s been trying to investigate. 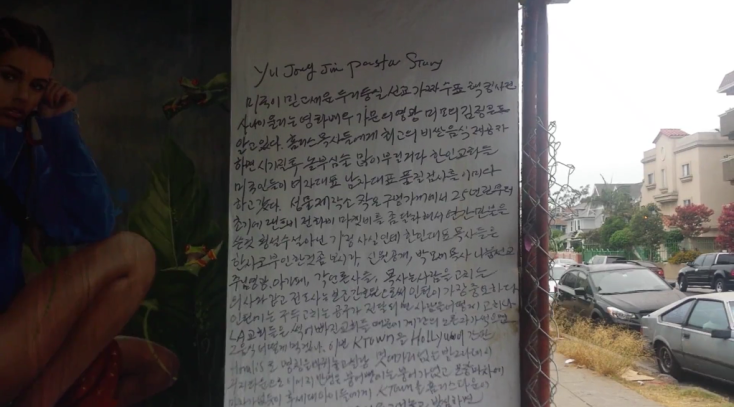 This is a timely story to tell because true crime obsession is real in an era where every second podcast is dredging up a cold case in grim detail. So many of these investigations, whether podcast or docuseries, are riddled with issues like misogyny/sexism in regards to female victims and, with the majority of hosts on these shows being white, racism. Lots of classism, too. Not to mention that while some of these amateur investigations have helped actual criminal investigations— Errol Morris’s classic documentary The Thin Blue Line literally got an innocent man accused of murdering a cop out of jail, and Payne Lindsey’s Up and Vanished has likewise helped solidify leads in cases— the majority of these podcasts/series just trot out the cases, sometimes with potential new evidence, and it’s really only the past being brought back for sensationalist purposes.

Murder Death Koreatown takes a long, disturbing look at how true crime obsession affects its white protagonist and those around him. His investigation goes nowhere, despite all his supposed evidence gathering. He treats himself like an actual investigator, talking about a “break in the case” and referring to it as “my investigation.” Simultaneously he admits, while talking aloud to a dead victim/himself: “I don‘t even know how to say your name right.” Only a couple days into his self-styled investigation he’s already consulting a psychic— a technique most actual investigators outright shun, and those who don’t usually leave that to a last resort only in the most desperate cases, the chilliest of cold cases. Worse is, conspiracy theories can’t be proved and cannot always be disproved. This can lead people, especially those dealing with mental health issues, down a dark rabbit hole.
Paranoid conspiracy theory and coincidence are a bad combination. If a conspiracy theory can’t be disproved and coincidence leads an obsessive mind to connect dots that aren’t necessarily there, this can produce a false sense of validation, and being validated only further makes such a mind obsess more. In one scene, the film’s protagonist actually says: “I feel validated right now in this pursuit . . . like I‘ve been chosen.” He starts to feel like he’s the only person who can possibly crack the case, that the clues are being shown to him and him only. Also such a toxic white male perspective, believing only he can get justice for a murdered Korean man.

Despite a somewhat ambiguous ending the film is always suggesting, in spite of a few creepy events, that its protagonist is an unreliable narrator. We see him slip from conspiracy theorist into full-blown mental illness. At first he’s depressed from being unemployed. It’s very likely he’s always suffered from a mental health issue. He starts rambling about people talking to him from the sewers. He yells on the streets: “There‘s a portal to Hell in my neighbour‘s garage.” When things get really tense, after his girlfriend leaves and seemingly goes missing, he’s completely psychologically shattered. Once the protagonist sees cops at his door, rather than logically think of explaining his ‘investigation’ to the police, he jumps straight to “hang myself” as an option, hoping to leave behind his rambling ‘evidence’ for someone else to decipher. If his mental state weren’t bad enough, there’s a lot of racism going on to which he’s oblivious. 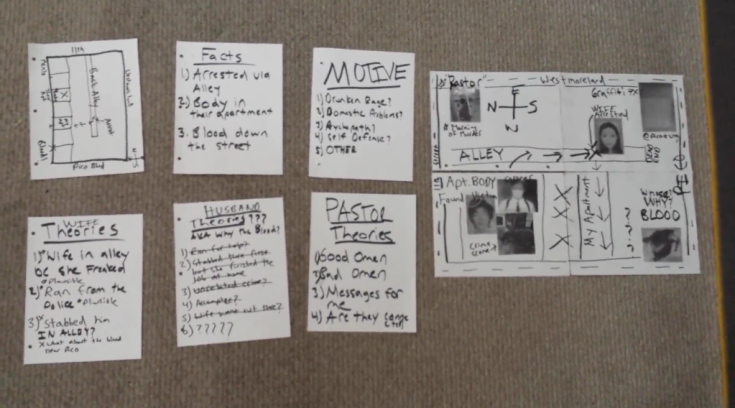 A major part of Murder Death Koreatown, other than its eeriness, involves how it deals with the whiteness of the true crime entertainment industry. The protagonist isn’t keeping a blog/vlog or doing a podcast, neither is he recording anything other than his descent into insanity through a series of notes and wild diagrams. He embodies all the problems of white people who make true crime content, as well as those who consume it and play online investigator behind their computer screen at home. He’s the epitome of white male entitlement through how he assumes the graffiti— written in Korean, a language he can’t read or write— he believes is a message is, in fact, a message to him, not somebody, y’know, Korean. He knows nothing about Korean language, culture, or customs, yet believes he can solve this murder that takes him into the heart of Koreatown.

This reminds me of a podcast called Broken Harts. It isn’t a bad podcast. It just feels strange having two white women discuss the case of two white women adopting Black children whom they abused and later killed in an act of murder-suicide. The podcast could’ve used AT LEAST one Black co-host. White true crime authors, podcasters, and filmmakers routinely believe they’re the best ones to tell stories about cases with non-white victims, when those cases require non-white perspectives for genuine context. The film touches on this often, like when the protagonist assumes blood and feathers on the ground means “chicken sacrifices“— not someone who kills, cleans, and cooks their own chickens; someone in my neighbourhood does this, she’s a white lady— or when he launches into wild accusations hurled at a Korean landlord and raves about a cult.

Apart from racism, the protagonist displays clear classism, even though he himself is currently unemployed. He also shows little regard for the mental health of others when he’s clearly in the midst of a struggle with his own. He never offers any of the houseless people he talks to any money for their time; incredibly telling. His encounter with one old houseless man, a Vietnam veteran, is where his classism and lack of humanity are most clear. The houseless man is obviously mentally unwell, randomly recounting his time in Cambodia during the Vietnam War. He agrees with nearly everything the protagonist says which helps validate the conspiracy theory, yet it’s undeniable he’s deeply mentally ill. The protagonist shows no care for the man and instead only asks for verification after he’s given info: “You weren‘t just liquored up?” The ultimate tragedy is that he can’t recognise serious mental illness in this houseless man while at the same time incapable of recognising it in himself. One of the final images of the protagonist shows him in a photograph on the street, looking dishevelled with eyes that are lost in an awful psychological darkness. It isn’t hard to imagine he’s eventually headed for a similar situation as the houseless man he encounters. 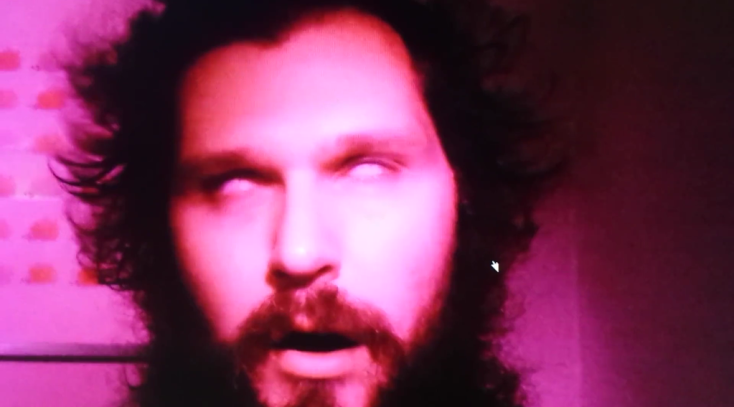 Obsessive minds, mentally ill or not, can do damage to themselves. When obsessive minds meet true crime and that becomes their obsession, it can do damage to others. Many families who’ve had loved ones murdered experience the wrath of online armchair investigators creating clues out of nothing, accused of the crimes themselves and being dragged through the mud by keyboard warriors. We can create patterns out of anything when that’s what we’re looking for, when we try to force our personal theories upon a case or a situation. This film examines all the collateral damage that occurs when the true crime obsessed take obsession too far.

Murder Death Koreatown is a unique film that feels very much like classic found footage, in the sense that (most of) it seems as if the footage was genuinely found and not simply a gimmick. That doesn’t mean I believe it’s real. I have no doubt this is a fictional creation. That being said, the way the filmmakers present their story it does draw you in. Because the story feels more like psychological horror, there’s a sense of reality that most found footage horror films simply can’t achieve. The protagonist’s descent into conspiracy theory reveals so much about white people and true crime, as well as exposes issues such as classism that’s all over the true crime ‘genre’— it’s icky to even call it a genre.
Bourgeois white people don’t have to stop writing about true crime, or even being online sleuths (because that’s actually helped in rare cases), they simply have to remember our white perspective is not the default, nor is it the most important. The best, and most efficient, true crime stories focus on the victims and the victims’ families. They’re not about the killer(s), and certainly not the hosts. Above all else, conspiracy theories are the film’s target. The message I take from it is, conspiracy theory usually does nothing but drive people mad and divide them from others. Worst of all, conspiracy theories usually only obscure the real truth and just makes it harder to find, like a tiny needle lost in a sea of needles.