A father takes his daughters on a road trip after their mother's death. But they run into terrifying supernatural trouble.

Adam Mason’s filmography, to me, is not exactly amazing. All the same, his work as a director proves he is at the very least still an artist whose main goal in horror is to be daring.
The first film of his I saw was The Devil’s Chair and I actually enjoyed it a good deal. It’s not perfect, but swings for the fences on almost every occasion. Then I ended up seeing Blood River, which focused heavily on characters, their development, and of course a nice dose of terror. However, his earlier film Broken did not impress me, at all. It was brutish, not in any good horror sense, and just downright bad.
When I first heard of Hangman the initial draw was Mason, as I do think he has a proper horror mind. It just doesn’t always translate perfectly to his films and their stories. Then I noticed Jeremy Sisto and Kate Ashfield were cast, and those names brought me into interest a little more. Sisto in particular is someone I’ve always enjoyed as an actor, no matter if the movies he’s in are good or not he is an actor whose performances are often stellar. Once I actually saw Hangman I actually couldn’t believe how badly it was being received. Not that I expected another found footage film to be received with open arms, but really this is nowhere near the shit quality of many other similarly styled releases. With a low-key atmosphere, handheld camerawork, and a very creepy villain in Hangman, this is a decent ride through familiar territory – with a gritty and horrifying focus on a madman who terrorizes families… all in the name of love. 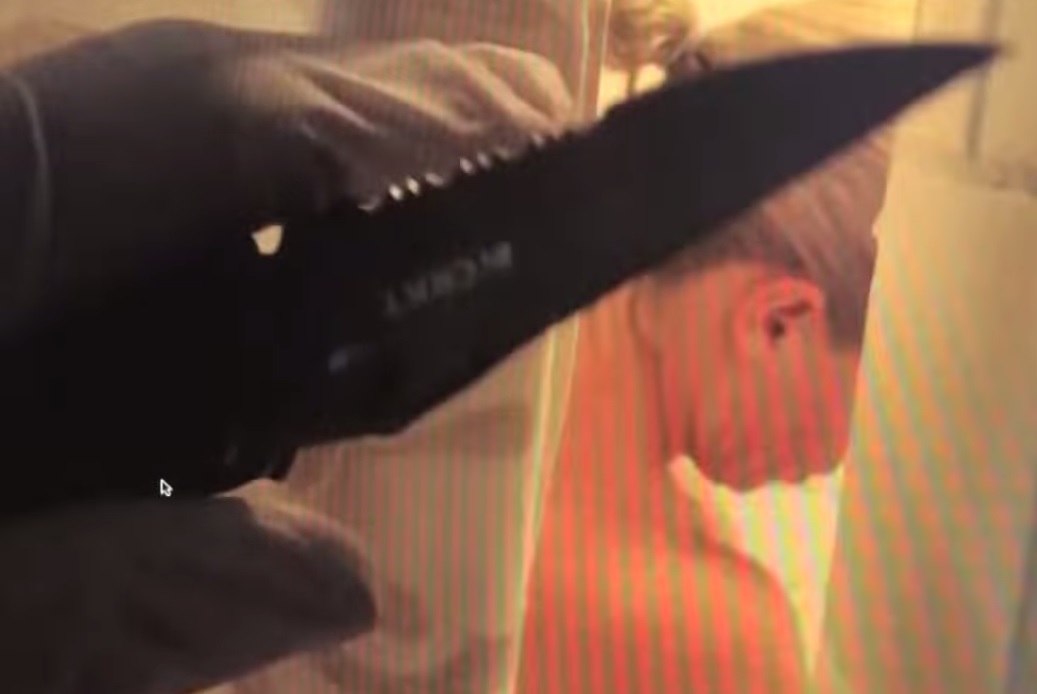 I won’t draw this review out with an explanation of the plot. It’s easy. You’ll pick up quickly.
One of the most disturbing parts of the entire film is when the Hangman watches the married couple have sex, all the while masturbating himself. But it’s afterwards when they’re finished, sleeping, and the Hangman cries alone, hunched over his own body, shaking with the tears; this is the truly disturbed moment. Obviously the man is a loner. We could’ve figured that out on our own. However, this brief moment is not in here to shock, or to gross us out, or simply to be crass. It’s in this scene where you can almost tell the deep seated issues in the Hangman are clearly family related; the lack of love is staggering. Maybe I’m drawing out too much on that one. But to me, it works. Further than that, awhile later he waits until the family heads out for a big day of fun, then sits on the couch while looking through family albums. He proceeds to scream into a pillow, punching himself, flailing his arms, and again it is even more clear at this point – he is either unable to have a family, to find someone to love; he came from a terribly broken and fractured family himself; or, nobody could ever love him because maybe he’s a monster in real life, too.
Aside from the creepy quality of the Hangman character, he is extremely violent. The stabbings we witness are savage, bloody. At the same time, they aren’t overly long. They come fast and vicious, just like a real life stabbing does (I’ve seen one, unfortunately). So even with the low budget style of the film we’re treated to a couple nasty bits of slasher-styled horror.
The music from Antoni Maiovvi here was something I enjoyed quite a bit. Because part of why the found footage format works here is due to Mason’s having the killer using lots of gear. So likely, he edits his footage. This provides Mason with a sort of way out, to escape the trappings of the sub-genre. Back to Maiovvi’s music – the killer often listens to songs, whether in the attic or in his car, wherever. And even if it weren’t the case, Mason uses the found footage style, along with his plot and killer to give us the possibility that this sickening creep of a man also adds in music to his little homemade terrors. There’s a fun 80’s feel to the music, but it has such a dark sound. Really fitting. In particular, I love the first scene where Hangman follows Marley (Ryan Simpkins) with her boyfriend, and when the boyfriend catches Hangman watching them, confronting him, the killer only turns up his music; takes on an even more ominous tone. 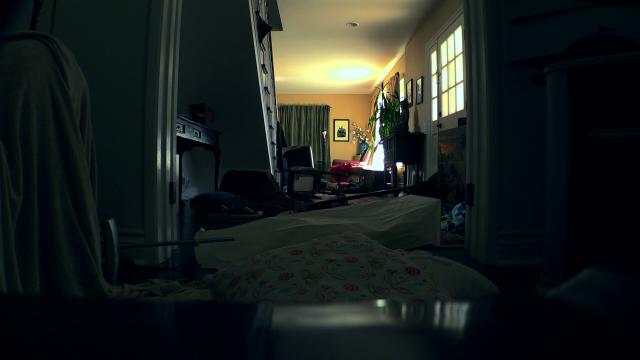 A moment many people will point out is when the killer stabs a character to death, then texts on said character’s cell, his glove ripped. He’s clearly putting his fingerprints all over the place. Can’t be a slip up, it’s too obvious. Perhaps he is falling apart. This is evidenced by the following scene, as an empty house is filled with the spooky wails of his sadness. Honestly, this part got to me. The intensity and depravity only spirals downward from there. A disgusting act of the Hangman comes back now and really starts to haunt the family he’s tormenting. This is the pay-off. The greater portion of the film is a quiet slow burn thriller, also including plenty psychological horror.
A lot of people aren’t going to find much to love about Hangman. The cinematography is non-existent because this film truly takes on the found footage aesthetic through low-fi video shot on handheld cameras, as well as security-type units, all handled by the Hangman. So there’s a few terribly shaky scenes. Some moments are awful angles, as the Hangman films himself doing various things. For me, there’s an terrifying emotional element to Hangman that gets under the skin, it seeps inside you throughout the quick 85-minute runtime, and once you get to the finale the movie really takes you for a harsh ride. I expected something similar to what happened, in terms of violence. But I didn’t expect the way in which it was executed. Above anything else, the visceral aspect of the entire movie is what will get you. Try and work past any problems you have with the low-fi feel because I found there were excellently horrific things inside the story.

Everyone else be damned: 3.5 out of 5 stars.
I’ve watched a ton of films; over 4,100 and counting, as of this writing. Not trying to say that gives me authority. It does not. But I’d like to hope I know a decent film when I see one. This is quite a slow burning thriller with horror elements, however, it isn’t so slow that there’s anything bad about it. If that’s not your thing, fine. Just don’t knock it because the pace is slow. Maybe the pay-off isn’t what you wanted. I found it an emotionally tense movie with a massively disturbing villain at its core. Give it a try. Blame me if you really feel 85 minutes is a waste of life; get over yourself while you’re at it. I’ve seen far worse found footage entries, this one had some teeth and didn’t flinch.