Trying to accept his insanity, Norman battles with his inner Norma, as Marion Crane's arrival at the motel comes with unexpected consequences.

This week, we’re back with Negan (Jeffrey Dean Morgan) and his captive, Daryl Dixon (Norman Reedus). Will we see a confrontation? Doubtful. I worry mostly for Daryl because he cares too much. Seeing as how, technically, he’s the reason Glenn took a barbed wire bat to the dome – over and over until his brains were mush – I feel as if Daryl’s going to take that on heavily, and psychologically he might never be the same again. It’ll be most interesting because Daryl’s not a comic book character, so his reaction to and involvement with Glenn dying comes totally from the writers here on the series. Let’s hope they do him right.
With Daryl in the clutches of Negan’s Saviors he witnesses how they live, which involves alcohol, lots of fresh food, even watching old tapes of Who’s the Boss? or at least that’s how it is for Dwight (Austin Amelio). Not everyone is so privileged. The Saviors have free run of everything within their grasp. Everyone in sight kneels for Negan, though. What a sad, sorry lot. Dwight pillages food to make himself a sandwich, as Daryl gets fed dog food between two buns. He’s already been down to eating dog chow. Stuck in a dark hole he’ll take what he can get. No less humiliating.

Poor Daryl, he has to listen to awful music, tortured how they liked to do in Guantanamo. He’s fed dog food, woken up constantly by the same song. No idea how much time is passing. They’re trying to break him down. The want to make him a Savior, from what I can tell. At one point he’s brought – wearing a sweatshirt bearing a large orange A – to a room where Dr. Carson (Tim Parati) checks him out. They run into Sherry (Christine Evangelista), who’s recently tested negative for pregnancy. Hmm, interesting. Does she belong to Negan? Or are she and Dwight an item? Hard to tell. But you can be sure women are probably closet to second class citizens in this type of society. The doctor has nothing for Daryl other than: “Negan will take care of you.” They run into the man himself. He wants to chat with Dwight. The saddest is seeing Daryl stare at a real room, one with a bed, a chair, books, so on.
Meanwhile, he’s brought outside where a ton of walkers are behind a chain link fence. Other men with sweatshirts, numbers spray painted on them, are in the pen. Dwight threatens Daryl, as if he’s not aware of the danger around him already. Then he gets tossed back in the dark little room to rot. “I ain‘t ever gonna kneel,” Daryl tells his captor. If he doesn’t though, what exactly will happen? Dwight seems to think he’ll kneel. Sooner or later. And the music starts all over again. Enough to drive any normal person totally insane. Negan’s happy with the progress, all said. We get a bit of saucy talk from the leader, mentioning “you know who” – I assume that’s Sherry. I can see somewhere down the line somebody will take inspiration from the coming rebellion against Negan, and one of his own men is someday going to be part of his downfall. That’s my take. One thing’s for sure: Negan has Dwight wrapped around his fist, not even just a finger. 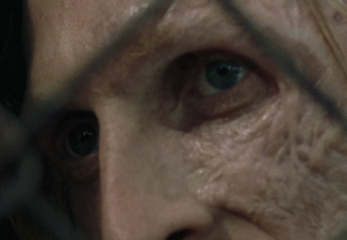 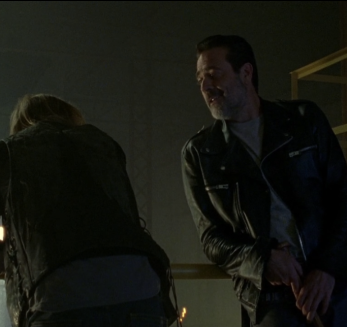 Daryl gets himself out of the dark closet and makes it down one of the equally dark hallways nearby. At the same time, Dwight is on the road headed somewhere, trying to move through a crowd of zombies left splattered along the highway. Parts are caked with guts, and then Dwight is nearly taken out once a walker comes flying down off the overpass. Whoa.
In the hallways Sherry finds Daryl. She warns him: “There‘s always more. You won‘t get away. And when you‘re back, it‘ll be worse.” Negan and his boys find him, too. They crowd around our hero. “Who are you?” Negan asks the guys around him: “Negan,” they all reply in creepy cult fashion. “I am everywhere,” he explains to Daryl. He makes clear that there is no way forward, alive, except to follow him. He even throws back to the bat, about to smash another head. Daryl flinches not even an inch. That doesn’t impress Lucille, though it does Negan. He’s one sick bastard, this guy. The Saviors beat Daryl down on their own like a bunch of bitches. Once he’s put back in the hole, Sherry comes to talk. About the last time she saw Daryl, when they stole his bike. And she admits to being sorry, finally.
On his way home Dwight looks rough. He happens across a man being attacked by a walker, he tackles him. It’s a stray from the flock. He doesn’t want to be a part of what Negan has going on there, not anymore. We discover that Dwight had a wife – Sherry – and that Negan did something bad, to them both; did he claim Sherry as his own? I think so. Either way, being on Negan’s side doesn’t always guarantee safety. Not fully. That’s what we’re coming to understand gradually. Isn’t that the general rule for cults? Because make no mistake: his commune is a cult. This man isn’t allowed to walk away, though. Dwight makes sure of it. 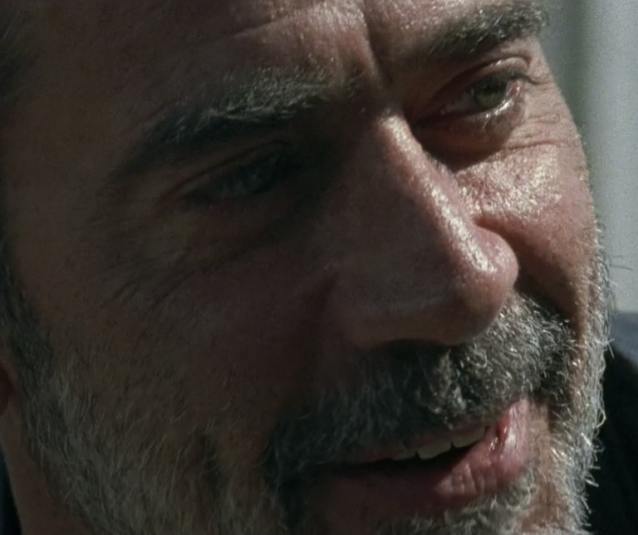 More dog food sandwiches for Daryl, more mental abuse. He’s left with one of those Polaroids, y’know, the ones we saw Glenn looking at near the end of last season when they came upon The Saviors’ lair. Sadly, this one is of Glenn’s smashed brains. Daryl gets left in the dark with having to see what he, accidentally, caused for his friend. It is horrific, and breaks his heart into pieces. Plus, more music to drive him mad (Roy Orbison’s “Crying” I believe).
Note: a silently amazing performance in this episode out of Reedus; an actor’s actor right now.
Later, Daryl’s brought to see Negan in that nice room the former stared into earlier. The fearful leader tells the tale of Dwight, his former wife, her ill sister. Seems that Negan wanted to make her his wife, then Dwight ran off with the ladies and stolen medication. We further discover Lucille had to take a victim. Then Sherry agreed to marry Negan, in order to save her husband. Dwight still had to take his punishment, all the same. Yikes, what a fucking horrorshow.
He finally asks Daryl: “Who are you?” No reply.
Will he break?
He asks once again and the nearly broken man replies: “Daryl.” So into the hole, more torture. They won’t kill him. Yet. But before Dwight leaves him alone, Daryl appeals to any bit of humanity left inside the guy. He makes clear that it isn’t only about him. He can’t give up. Not for Negan; not for anybody. I can see a glimmer of hope left deep in Dwight, I’d like to think he can change. However, it’s unclear if that can ever happen. If he could ever live through it. What’s interesting is he wears the old biker cut Daryl wore, wings and all. Sort of speaks hope in itself. 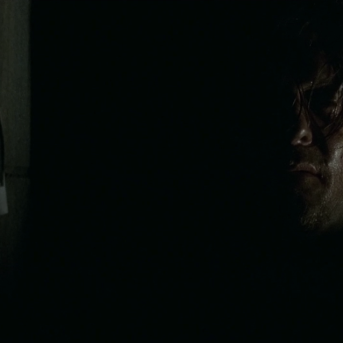 I am loving Season 7! They are stepping up, in big ways. Lot of different avenues for storytelling and different plots from various characters, many angles. Negan allows for plenty of that, as does the opening up of communities in the zombie apocalypse.
Next episode is titled “Service” and I believe we’ll begin to see the communities interact more. Will we see Rick Grimes and the crew, as well?