When I start reviews of films which use the found footage format, often I try to defend the sub-genre. Because while some don’t care for it there are certainly enough people out there, such as myself, who can still enjoy these movies. Particularly those that use the technique well. Afflicted doesn’t revolutionize the sub-genre, nor does it give us a plot and story that turn things on its head. What we do get is an interesting, well-filmed found footage horror that is full of mystery and has plenty of thrills. With two actual lifelong friends writing and directing, as well as starring in the picture, a dark and twisty path takes us along for the ride. Even with its flaws Derek Lee and Clif Prowse make Afflicted into an exciting little flick with solid pacing and tons of energy. This is a movie with the ability to impress via makeup effects, the lead performances, and its story also reels you in with a charmingly emotional beginning that slowly descends into the stuff of nightmarish terror. Derek Lee (playing a version of himself) is diagnosed with a brain illness that can and will either paralyze him, or possibly kill him. So Derek and his closest friend Clif Prowse (also playing a version of himself) set out to travel the world. They plan on documenting every last second of their trip for a video blog, “Ends of the Earth”, and Clif takes all his video equipment, from body-mounted cameras to small Go Pro-styled units.
When they start to hop from one place to the next, Clif is determined to hook Derek up with a lady. But Derek beats his friend to the punch and runs into a beautiful woman at a club; they dance, they go home together. When Clif goes back to the room he finds Derek knocked out, bleeding from his head profusely, as well as a cut on his shoulder. Derek refuses to go to the hospital, even after vomiting everywhere and then later punching a hole right through concrete. As things get progressively more strange, Clif tries to convince Derek he needs to seek medical help.
Something takes over Derek’s senses. He starts to become something else. At first it seems beneficial in most ways, as Derek can run over 60km/hr and can jump over a story high. But the virus infecting him proves to be far from beneficial – Derek can’t eat anything without throwing it up, his body starts deteriorating, and his powers start to become more powerful than he thought possible. 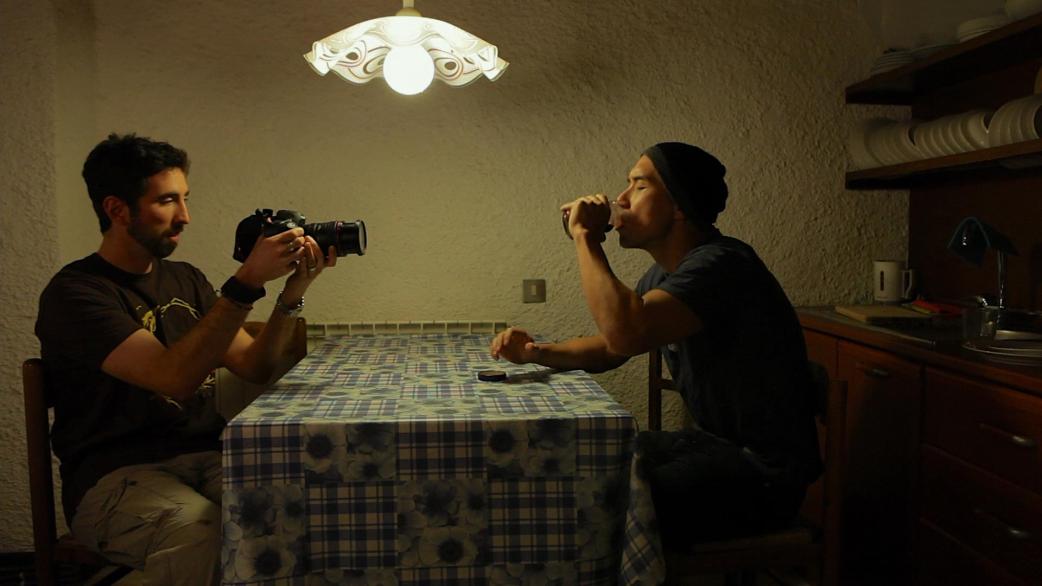 The makeup effects are incredible. One of the first truly impressive moments is when Derek tries to take out a contact and pulls off part of his eye; such a simple effect, but how they shoot it works so well. All the effects get better as the film progresses, even the simple little things are done right, which adds a good dose of reality to things alongside the use of found footage. There’s a head that gets blown out the back with a gun at one point, and it is unreal how awesome it looks (plus you’ll be blown away similarly by the twist of it); such nasty effects work, dig it.
Also, not sure if it’s done digitally, but regardless – the Sun Test that Derek does on his hand is so gnarly, in the best sense. Added to that sequence is good sound design. As Derek runs through the streets, his skin sizzles and you can hear it underneath the plethora of other sounds, and is it ever well done. The body-mounted camera works like a first-person shooter video game here, which I enjoy. Though it’s shaky cam for a couple minutes, the found footage takes on a more action oriented perspective than simply people running through the dark, in the woods, screaming. So points for that whole segment, it is super neat.
All stunts involved are excellent, so perfectly executed. The car-punch scene was great, as are the scenes were Derek tries jumping up some buildings. Other than Chronicle, most found footage films don’t go for such big scenes. There are others that have tried, but none other than that film which succeeded like this one. Again, the body cam chase scenes do it for me. They made it look like a whole lot of fun, in the most dangerous way. Plus, the plot gets more frantic and wild, so the frenetic bits there play into that whole element.

The performances of both Derek Lee and Clif Prowse were good. It helps they are actually close friends and have made short films together, because their natural relationship comes across, sort of anchoring us to the characters almost immediately. Working from there, the screenplay is pretty solid. A few points could’ve been tightened, though, on the whole it is mostly intriguing. The movie’s exciting and certainly deserves 4 stars. With found footage it can be a really mixed bag more often than not. It’s still a sub-genre in which I’m very interested. It does have a lot to offer when used appropriately, which Lee and Prowse do here. Everything works towards a proper mix of horror, mystery, and thriller. We’re lucky to get a different type of vampire flick in the midst of so many sub-par films trying to do different things with the vampire lore. The last 20 minutes or so give the real goodies.