We begin this episode in a Mexican church, as the priest speaks of the world’s troubles not as from God, because he wouldn’t do such a thing. Then out from the church everybody goes, grabbing weapons. Thomas Abigail (Dougray Scott) shows up to warn the priest not to go ahead with what they’ve got planned. But everyone starts bleeding from the eyes, collapsing, and Tom is left in the midst of it. Incredibly creepy opener to this week’s episode.

Back out on the boat, Chris (Lorenzo James Henrie) is defending his decision to shoot Reed. Turns out Madison (Kim Dickens) is worried about Travis’ (Cliff Curtis) son. Inside, Luis (Arturo del Puerto), Strand (Colman Domingo) and Madison spot some incoming trouble, people in a smaller boat. They’re interested in the nice boat. Luckily, Daniel (Rubén Blades) listens in to the Spanish conversation, sussing out what’s going on. And things start to take a turn for the worse.
Gun shots. Footsteps running everywhere. All of a sudden the boat starts up, Strand is all right. Daniel heads out to start taking care of the soon to be zombified corpses. Poor Luis hasn’t fared too well either, taking a shot in the gunfight and ready to die. He doesn’t want to get it in the head. Preferring to walk the land as the undead.
But soon the survivors arrive on shore. They head into the village nearby where things are… rough. Piles of bodies everywhere. Some impressively nasty practical makeup effects work. The whole place is an outright massacre, which of course sets Victor off worried for Tom. A large group of walkers turns up around the corner, even some of the choir boys from the church earlier, and the zombie action is pumping! Everybody takes their turn swinging. But the swings in turn take their toll: Nick (Frank Dillane) is forced to kill a little girl in her pink dress with the bow in her hair.
However, even worse is Daniel’s experience. He first kills the zombie priest, then a little boy comes at him. He grabs him by the throat, immediately flashing back to a devastating time, some time long ago; the first visual glimpse of Daniel’s past we’ve seen, of what he’s only so far alluded to in brief chats about having seen awful military situations before. Can’t wait for more of this to come out. Wow. More than that, Chris almost lets a zombie eat Madison before Alicia (Alycia Debnam-Carey) intervenes. Yikes! That’s some stepmother-stepson shit that’s dangerous. 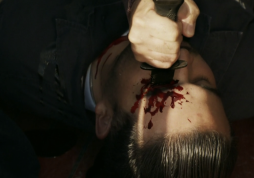 Finally, a little hope. They reach the gated path to a load of fields approaching that palace where we saw Thomas and Strand back before the fall of humanity. For the moment, everything is safe. Well slightly, anyway. Everyone has to give up their weapons, but that’s a small price to pay. “There‘s no need for them here,” says one of the staff. Daniel is a little reluctant, though relinquishes his weapons after all.
Tragedy isn’t too far. Strand finds Tom in his chair, staring out the window. A deep bite in his arm. Obviously a devastating blow for Victor. This is way too sad, knowing that it was essentially Tom driving him to get there, to survive and to carry on. Their story was so interesting and unexpected, too bad Tom is on the way out.
All the others are doing their thing to relax a little while they can. Alicia isn’t happy with Chris. He is going off the rails. Basically, he threatens her: “I don‘t wanna hurt anyone.” This is one creepy turn of events now. I’m really worried, and interested, where this is headed. Nick is in the kitchen with Luis’ mother Celia (Marlene Forte), eating before supper and also confessing to being “sick of it“, the murder they’re all forced to commit in the post-apocalypse landscape. All the same, Mama Madison isn’t too keen on Celia filling Nick’s head with her Mexican faith.
Madison also gets a glance at the other side of Victor Strand, in bed with his lover. This is something new for them. Even more than that Tom requests she “look after him” once he’s gone. Naturally, Strand wants to brush it off as not needing to be talked of, no death, nothing like that. Madison still recognizes the request. I hope her and Strand form a closer bond from here. They’re both tough in their own ways. Right now I’m actually worried about Daniel, as he seems to have slipped slightly from his tough exterior, softening due to the horrific experiences of his lives. 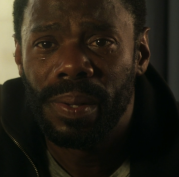 Alicia: “It‘s kind of pathetic how much I miss t.v”

Now that Alicia has made her fears clear to Madison, the married couple are arguing about Chris’ intentions. Travis doesn’t exactly like the talk of his son being dangerous, especially because he’s supportive of Nick, her son and his problems. There’s a big wedge stuck between Madison and Travis at the moment. They each want to side with their child, obviously. It’s just a difficult thing with which to deal, at any time. Let alone in the midst of zombies. Meanwhile with Tom on his deathbed, Victor even offers to go with him. He admits Tom is his only reason for living. 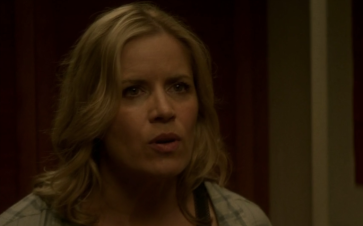 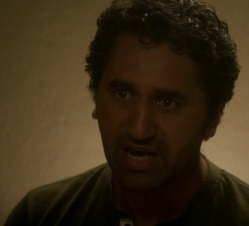 Victor: “I‘m begging you. This world was never good enough for you. Let it go.”
Tom: “I don‘t want to leave you” At the same time, Daniel has discovered something altogether disturbing. In a cellar there are a bunch of walkers. Seems they’re mostly Celia’s family. So that’s why Luis didn’t want to be put out. They all come back, y’hear. Well Daniel and Celia have a tense, unsettling conversation about what she’s been up to, and none of it is pretty.
Upstairs, she tends to Thomas whose final minutes draw closer every minute. Strand watches on in pain. However, he’s decided to join his lover. Celia has the right remedy: communion wafers, just like the parishioners from the church she poisoned. Now they can all remain in the afterlife, still on Earth. Crazy bastards. But Strand’s not really going out like this, is he? I doubt that very much.
Thomas passes away silently with Victor by his side in bed. In a world of terror, this is a slightly more peaceful death than many have been allowed. Simultaneously, Chris gets up in the middle of the night and finds himself standing over Alicia and Madison, holding a knife. Uh oh. He’s interrupted when Strand shoots Tom in the head to prevent his reanimation, and of course decides not to Celia “Jim Jones” Flores himself. Developments are adding up and things are getting exciting. Looking forward to the next episode titled “Shiva” and that worries me, for anyone who knows what the term means that points to the likelihood of something terrible happening. And it’s been awhile since we’ve really lost anybody too important, right?