We open on Jemaine Clement playing Oliver Bird, husband of Dr. Melanie Bird (Jean Smart). He paraphrases Friedrich Nietzsche’s quote: “Under peaceful conditions, the warlike man attacks himself.” He speaks about the fear of the unknown, and violence as ignorance. Everything around him’s cold. Very, very cold. Then he mentions empathy v. fear in telling stories to children. Ought to remind us of David Haller (Dan Stevens) being told the story of that angry boy.

Back to present events. Syd Barrett (Rachel Keller), Ptonomy Wallace (Jeremie Harris), Dr. Bird, they’ve been sucked into the world of David, the one trapped in his head. There’s no telling if anything is real, at any point in time. At Summerland, Cary Loudermilk (Bill Irwin) tells them there’s no medical explanation for why David’s in a coma-like state now. Neither he nor Ptonomy can figure it out. He’s stuck between dreams and reality, somewhere. They’ve got to discover what happened to David before he wound up at Clockworks Hospital, what damaged him so bad.

Off they go, searching for answers. They go to the places where his memories took them. First, the office of Dr. Poole (Scott Lawrence). Ptonomy and Syd discuss what happened in David’s memories, the abnormal “tear” in the physical space where they experienced those moments. They find a recording device from the doctor’s sessions, beaten, bloody hand prints on it— using their powers, it comes back to life and tells them of a possibly brutal, violent crime. Poole was beaten horribly with savage force. But, did David actually do that? Or was it the dark entity, The Devil with the Yellow Eyes? Did he break into Poole’s office originally to steal things for drugs? Was it something else? We’ll see.

Poor Amy Haller (Katie Aselton) is still being held captive, too. She’s not faring well, psychologically. Although she discovers there’s someone else nearby locked in a cell just like her: David’s former doctor at Clockworks. She laments not realising sooner there was something different about her brother, since he was young he moved from “room to room” and even further at times. He talked to people frequently, such as their dog King. Only they never had one.

Everyone around the man’s been affected. Amy is in a cell, alongside the doc. Meanwhile, Syd, Ptonomy, and Kerry Loudermilk (Amber Midthunder) are searching for the clues that will lead them to the answers. We get the story about the Loudermilks, or, well… the one Loudermilk. They share a body, Cary and Kerry. Two people in a single body, though the experience for each of them isn’t entirely identical, Kerry exists in a sort of spirit state while Cary is the more corporeal form on a regular basis— she comes out to play when necessary.

In her office, Dr. Bird has a vision of a person in an old school-type diver’s suit. She tells Cary of the incident, hoping it’s a sign David may be coming back to the land of the living. The guy in the suit is Oliver. His physical body is kept frozen in a chamber downstairs.

David, in one of his mindfuck landscapes, meets Oliver. Not really, he just gets a wave from the diving suit-clad dead guy. To follow him elsewhere. So, they head into the great unknown together, as David follows him to a ladder. Up, up, up. This leads to that place where first we saw Oliver, talking to us. That freezing place. There, Oliver sits for a drink and a chat with his new friend. “What‘s real in this space is whatever you want it to be, so, my feeling is: why not wait in style?” he quips to David.

Bad news— David’s lost. Good news? Oliver has himself a bit of company. And someone to bounce beat poetry off when the mood strikes. They get to talking about David and his powers, the monster waiting for him around every corner. Now he’s intent on getting out of that cold place. He plunges back into the “vast subconscious” in order to make his way back to real life. If possible. Oliver certainly doesn’t assuage any fears, warning him things get tricky out there, outside of that protected place.

Ptonomy and Syd go to visit David’s ex-girlfriend. To scan her memories. They need to find more of his past, from wherever it comes. Back through a few of them, Ptonomy watches a dinner with the formerly happy couple and Dr. Poole. Then he finds traces of another memory within it: they know where Poole lives. Ah, and more comes to light! Lenny (Aubrey Plaza) was actually a drug pusher named Benny. Plus, the ex tells Syd and Ptonomy ominously: “Tell him they‘re watching.”
Oh, my. So many questions. Implanted memories, hidden secrets.
What is real?

They track down Dr. Poole at a lighthouse, who’s reluctant to speak about David. Soon he tells them about the good and bad sides of his former patient. He says he’d actually like to see David again. Because he needs answers, after having his entire life ruined.

Afterwards, they find themselves trapped by The Eye (Mackenzie Gray). Nothing is real. Armed men lay siege to the lighthouse. The trio run upstairs, but Kerry’s ready to take the offensive to their attackers. A fight breaks loose, where Kerry fights (and Cary goes through the motions back at Summerland), and we also see The Eye in action for the first time, he has his own powers. Unfortunately, Kerry’s taken down. But Syd, she touches The Eye with her bare hands. You know what THAT means!
Note: This is one of the best sequences of the series so far in these first four episodes. So powerful, exciting. Gives us awesome insight into the Cary-Kerry dynamic, as well.

David’s brought into another headspace with/by Lenny. She has things to talk about with him. She chastises him for going with Dr. Bird, ending up in Coma Land. He only wants the truth, even if she’s intent on her own designs. She riles him up into an angry, terrifying state.
Then suddenly, David is in the woods. He runs a truck off the road containing Syd and the others— he doesn’t realise there’s been a switcheroo. This starts up an awkward chase, as David urges Syd— The Eye— to run. When they switch back, The Eye puts a bullet into Kerry, sending Cary back at Summerland into a bleeding tailspin. Not so sure anymore that Lenny’s there to help David, not at all. Seeing as how she appears on his shoulder, while her hand looks suspiciously like one belonging to the Devil with the Yellow Eyes. 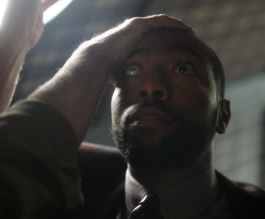 Another fascinating Chapter in Legion! Wow. Every one gets better visually than the last. I don’t doubt we’ll see the momentum charge forward in Chapter 5.
Lots of weird and wild action afoot.