We start Season 3 with another black-and-white flash forward into the future of Jimmy McGill a.k.a Saul Goodman a.k.a Gene the Cinnabon manager (Bob Odenkirk). Nancy Sinatra croons “Sugartown” as we watch his daily life at the Cinnabon in the mall. Far from where we saw him in Breaking Bad, juxtaposed beautifully with the place we follow along in the current timeline of Better Call Saul; one of the fascinating parts of the writing and the progression of characters is how Gilligan & Co. pull off making his journey into a, at times, non-linear adventure. In turn, this keeps things fresh even though we already know where Jimmy/Saul ends up down the road.
What I’m most interested in is where Gene goes from this point post-Breaking Bad, or if he continues on in his purgatorial existence, a fitting end for a greasy guy such as himself. Eating lunch alone on a bench he winds up seeing a sketchy young man who looks to be hiding, in trouble. Rather than let the kid go on, he rats him out to the cops. Then in a burst he tells the kid to say nothing, and advises him to get a lawyer. That old Saul came loose, even for a second. Gene’s not as measured as he once seemed. Later while glazing some buns he passes out. Yikes.

To the current timeline. Jimmy and Chuck (Michael McKean) are back where we left them, when the younger brother confessed to his brother believing no one else would hear. Not knowing Chuck was hiding a tape recorder the entire time. All the while Jimmy thinks everything’s well, or at least stable. A situation he can manage. The brothers reminisce about being younger, triggered by The Adventures of Mabel which Jimmy finds in Chuck’s bookcase. For the first time, they actually seem like brothers. Not for long, though. The older of the two reminds with an ominous tone: “You will pay.”
Kim Wexler (Rhea Seehorn) is doing her best to keep her chin up, too. Despite the rollercoaster of a life she has sitting next to Jimmy. He’s not exactly a dream dude to be involved with in business, or in friendship, love, et cetera. Eventually I have to believe Kim won’t be able to reconcile her morality with being on his side. She already knows he’s not on the level, but just doesn’t realise how deep the well of deceit goes. But as always, the problem is that Jimmy’s such a likeable loser that it’s very tough not to root for him.
Jimmy: “For ten minutes today Chuck didn‘t hate me. I forgot what that felt like.”
Meanwhile, Howard Hamlin (Patrick Fabian) hears Chuck’s tape of Jimmy and the confession. Certainly the secret recording isn’t enough to hold up in court; Chuck knows. So why have the tape at all? Does it involve Kim?
Of most interest to me is Mr. Mike Ehrmantraut (Jonathan Banks). He was out in the desert, and found a note telling him to get away. A warning, but from whom exactly? Mike does the smart thing, speeding away from the scene then checking his car for any kind of devices; nothing. He heads to a scrapyard and has a closer look. And I mean a CLOSER FUCKING LOOK. Mike uses every last ounce of his training to look through the guts of his car, inspecting each inch with precision. Like he can smell it yet can’t seem to find the thing.
Finally, he discovers something hidden in the gas cap. THE GAS CAP! An ingenious, tedious place to hide a tracking device. That’s some next level deviousness. But now Mike has some idea, a starting point leading to whoever’s keeping an eye on him so close.

Jimmy receives a visit from Captain Bauer (Brendan Fehr), one of the military gentlemen whose eyes he pulled the wool over when needing to cut a commercial. Anyways, he’s not happy. Slick talkin’ Jimmy tries to sell him a load of horseshit, that doesn’t work. Either Jimmy takes the ad down or “there‘ll be hell to pay.” He doesn’t dig that, so he threatens to take it to court and win. The captain advises him, in his own way of speaking, that eventually Jimmy’s going to get what he deserves. From the flash forwards and seeing Breaking Bad, we know this to be true.
With his newly acquired knowledge, Mike switches out his gas cap to head off after work. At an old warehouse he meets his friend the veterinarian (Joe DeRosa) to get himself some gear. Pricey, too: $1,000.
Back to Kim, over at Mesa Verde she’s doing great work. As always. Worse still she knows the treachery, the guilt eats her. How long before it eats her alive? Every time she hears about Chuck and his supposed mistake, it’s like a stab in the gut. Also, in the office – that rainbow… any imagery connections to that in Season 2? I’d like to revisit that.
Over at Chuck’s place, he has to get Ernesto to help him change batteries in the tape recorder. The thing is on when he changes them, he hears a bit of Jimmy confessing. This sends the old gentleman into a fit of anger, trying to make sure Ernesto won’t ever tell anybody about what he’s heard. “There could be terrible consequences,” Chuck convinces him with a torrent of quasi-threatening language.

Mike, Mike, Mike; what will you think of next? He’s like the counter-intelligence king of the streets, using all that police knowledge from busting criminals, learning their ways, to fuel his own criminal enterprises. Except right now it’s like espionage, trying to discover who’s on the other end of the surveillance on him. He’s reversing the cat and mouse aspect of the dangerous game that’s being played, or at the least trying to do so. And he loves pistachios. Fucking loves them. I don’t blame him, either; they’re great.
After a long night of waiting, Mike sees a vehicle stop. Someone retrieves the GPS tracker from the gas cap then they’re off into the night fast as they came. So, Mike has a lead on where they’re headed.
Want to take a guess? Might have something to do with Los Pollos Hermanos, maybe? 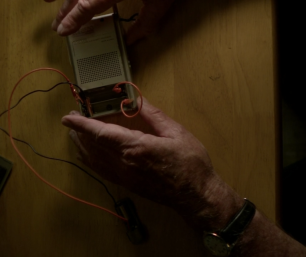 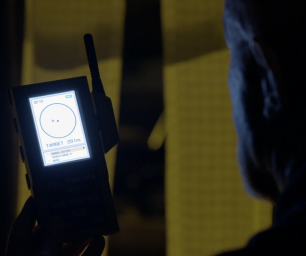 Great start to the season! I don’t care if people say the show’s slow moving. It’s meant to; the storytelling and the character development and the plot moves are all spectacular. Great music and score, as well. Excited for “Witness” next week. Welcome back.