We start in familiar desert territory. A Los Pollos Hermanos delivery truck drives down a desolate road. As if signifying what’s in the truck, as if we didn’t know, and how long this has been going on, the sneakers on an electrical wire above drop from their perch to the ground.
Mike Ehrmantraut (Jonathan Banks) gets a call from Gustavo Fring (Giancarlo Esposito) on the cell he’s found on top of a gas tank cap in the middle of a road. He’s told to “expect two cars momentarily.” The man himself arrives in sombre, black attire. Mike wants to know why he received the DON’T note. Gus relates that Hector Salamanca needs to stick around; at least for a while. But the problem is there have been threats, nasty business. What the owner of Los Pollos Hermanos explains is that, as long as the “hurt” Mike doles out to Hector is kept on a business level rather than a physical, fatal one, then he won’t interfere. Well, we know there’s more to Mike and Gus’ eventual relationship, so it’ll be interesting to watch it all play out. Now, Mr. Ehrmantraut makes clear he’s “not done” with Salamanca, and that he understands Fring wants to disrupt the guy’s business because they’re in drug competition.
It’s excellent to see the back story of these characters coming together.
Note: love how the camera frames Mike and Gus in positions of power; they’re on a flat, straight road, yet the shot shows them on an angle which puts Gus higher up on the plane than Mike. Very interesting, great filmmaking techniques are often used in this series (as it was on Breaking Bad) and that’s a huge reason why this is GREAT TELEVISION!

In other news, Jimmy McGill (Bob Odenkirk) must deal with the fallout from rushing in on brother Chuck (Michael McKean), smashing the tape recorder in a rage. He’s having a cigarette, finding the number he has for a bail bondsman. To see the brothers fall further into despair is ugly, considering the older brother’s planning on pressing charges. All under the guise of being for his younger brother’s benefit. I’m not sure if he’s being honest, or if it’s because he never wanted to see Jimmy succeed in the beginning. For his part, Jimmy tells Chuck that he’ll die alone.
Then it’s off to jail in a montage for the unlucky lawyer, the man we’ll someday know as Saul Goodman, lawyer to Walter White and Jesse Pinkman.
What about Kim Wexler (Rhea Seehorn)? She’s busy, as usual. Doing the tough job of living life in the same hemisphere as the McGills. Ernesto (Brandon K. Hampton) arrives to tell her he’s been fired, and worrying about Jimmy. And now she knows that her good buddy is sitting in lockup, clad in orange. In court he pleads Not Guilty; Kim turns up as his attorney, though he’d rather represent himself. He refuses to let her have any part, then he’s bonded out at $2,500 and gets back to the office to plead his case to Kim, to let her know he’ll fix things. Somehow.
Jimmy: “I fucked up”
At a doctor’s office, Mike – or, Mr. Clark – goes in to see a “mutual acquaintance” to retrieve a package. He tucks it away in his trunk with the sniper rifle he’s carrying. Hmm, ominous. More trouble is certainly headed Hector Salamanca’s way.

Jimmy’s trying to get an old law buddy to help with his case. Looks like it won’t pan out, seeing as how they’ve worked closely in the past. This takes the wind out of his sails a bit. More scheming ahead, just wait. Meanwhile, Chuck is meeting with an attorney about what’s happening next in his brother’s case. She isn’t going to take it easy on him, wanting to make sure lawyers aren’t held to a lesser standard. I only wonder: will his condition make it difficult, or cause issues, in court? Should be fun to watch.
Back to Mike, in the desert again. A place we Breaking Bad lovers realise he knows all too well by the time Walter enters his life. The old fella is out putting drugs in a pair of red sneakers, tossing them up on a nearby wire; the worn out shoes we see finally snap off the line some time down the road, as evidenced by the ALTO sign without the bullet holes shot through it yet.
He then sets up camp on a hill with his rifle, watching through binoculars to see who’s approaching on the road. A pair of men come to look under a sort of trap door in the desert floor; is this the same one Mike later goes to in Breaking Bad when he and Jesse make collections? Either way, Mike plays a game with the men. Then he shoots one of the shoes as the truck passes, letting a thin powder flow over the truck, catching on its rear step. Whoa. That’s fucking sneaky, dude. When the truck is stopped for inspection, a drug dog picks up on the scent, and voila! Another Salamanca plot foiled, another plus for Fring’s business. I can see already how the meth kingpin will come to find Mike and his services invaluable.
Going back to the opening scene, we understand this as being an illustration of how Gus now owns the route, that it’s a sign of his, for a long while, undisputed power. Where Hector’s trucks once ran, the opener shows us that Los Pollos Hermanos takes that route, well into the future, and the bullet-riddled ALTO sign shows that there are many wars to come.
While everything else is going on, Kim and Jimmy are dealing with the “boxed in” situation he finds himself in with Chuck. So, what next? She suggests he isn’t alone, that he needs her. But I can’t help feel this is a one-way ticket to the nail in the coffin for their relationship. Maybe not next week, or the week after. Just sooner than later. 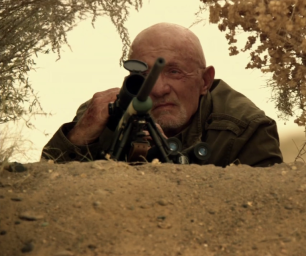 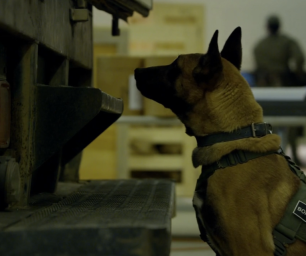 Another great episode. Many say this show is slow. Part of why I dig the series is because it burns, slowly, and if you don’t dig it that’s fine. Don’t say the show isn’t good, because it is, it lays out the groundwork for great characters and compelling, well-written plot. Good on the writers and producers. Next week is “Sabrosito” and I know we’re seeing more of Mr. Fring, too.