* For a recap & review of the next episode, “Birth Day” – click here

This adapted series from Margaret Atwood’s blistering novel begins with a car being chased down a road, police close behind. Offred (Elisabeth Moss) sits in the back with Hannah (Jordana Blake) next to her; Luke (O-T Fagbenle) drives, fast as he can. Soon they’re stuck in a ditch and they have to get out and run. They go quick in desperation, their destination supposedly not far off. Gunshots blast in the distance, so Offred picks her child up and runs. After some time they hide, but men with guns lurk too close for comfort. They eventually leave.
Although it’s clear this is a world full of dangers. It isn’t long until the men catch up with them and take the child from her mother. They’re taken out of the woods and back to the place from which Offred so badly hoped to escape.
She is a handmaid. She’s forbidden to be herself; a woman. Or rather, she is made to be only woman. As in, nothing other than her biological sex – determined by the ruling class: man.
She’s kept in line by Serena Joy (Yvonne Strahovski), who shovels the shit of Commander Waterford (Joseph Fiennes) and others like him. Offred is at her new posting, seeing as how the last one didn’t… work out. There is much woman-on-woman hate here. In the days of hyper nationalist women today, ushered in heartily by Trump and Co, it isn’t hard to see Strahovski channel people like Ann Coulter or Kellyanne Conway (among many) who seem to be women bent on destroying other women. And what all that can lead to, which is this authoritarian, patriarchal nation-state they live under.

“A handmaid wouldn‘t get far. It‘s those other escapes, the ones you can open in yourself given a cutting edge, or a twisted sheet and a chandelier.”

Poor Offred and other women go through the motions. They’re in permanent servitude. There’s definitely a hierarchy of men, too. But then again, that doesn’t matter because they’re the oppressing and ruling class, the dominant gender in this horrific world. Guys like Nick (Max Minghella) do the ‘lower’ work like labour as The Commander struts about his mansion. Meanwhile, Offred and Ofglen (Alexis Bledel) walk in pairs, they wear their uniforms.
Note: The headdress they wear is intriguing and in terms of costuming this series is off to a major start, such impressive work! They’re essentially a less-covered, Conservative version of a veil. Also, they’re blinders. Like horses would wear. Fucking grim, Margaret! Nice touch. Likewise the cinematography already is spectacular – so rich, at the same time it’s grim even in the light of day in the midst of a forest. Courtesy of Colin Watkinson (shot Tarsem Singh’s 200 visual feast The Fall).
Life in this nation-state is terrifying. Offred and Ofglen see three men hung on a wall as they walk through the otherwise beautiful city: a priest, a doctor, and a gay man. We see Offred in flashbacks to life outside in the real world, with a friend named Moira (Samira Wiley). Then they’re in a classroom, Aunt Lydia (Ann Dowd) talking of God and how he “whipped up a special plague – the plague of infertility.” And we see Offred meet eyes with Moira, now both in the same, awful place. These women in the room are fertile. They’re intended to bear children; this is their purpose to men. Lydia is another self-hating woman whose purpose is to keep other women in line. A little worse, though. She has a stun stick she carries, zapping anyone who talks too much. Those aren’t the worst punishments. The breeding stock women are treated almost worse than others; one of them is punished by having her eyes plucked out. Don’t need eyes to have babies. Yikes!

“This will become ordinary“

Ceremony Day is coming up, so this means Offred must be washed, cleaned to the utmost care. Like a “prized pig.” At the same time, it’s hard for her to forget life before the state and its tyranny. She longs for her daughter, hoping that she won’t be forgotten. It’s a brutally real emotion and Moss quietly portrays it with great nuance.
The breeding women sit in a circle, as one of them is made to confess supposed transgressions for leading on boys. Lydia makes them all chant “Her fault” in response. When Offred doesn’t say the right words, a woman steps in and slaps her face (that’s Margaret Atwood, by the way). Then she succumbs, falls in line; in her place.
There are many rules living with The Commander. One reason why Serena is so bitter towards Offred is, clearly, she is infertile, and hates her for somehow being able to bear children. Well, Ceremony Day isn’t the easiest especially. A bit of reading from the Bible, some mechanical sex as Offred is held by Serena who looks her husband in the eye, and he stares back. Holy fuck; pardon the double pun. Afterwards, it’s more than awkward. The environment of the house is straight out hostile. “Get out,” Serena tells Offred once the dirty deed is complete.
At night the girl with her eye plucked out, Janine (Madeline Brewer), is having troubles. She’s going a bit crazy, talking to herself. When Moira tries to stop her, we find out a bit of information. About the Colonies, where people clean up toxic waste, where they get radiation poisoning and their skin peels off and they die. One place is as bad as the other, just in different terms.
All the handmaids are brought to a field where a stage is setup. Offred hears that Moira was sent to the Colonies. Likely dead. No time to mourn, they have rituals to perform and everyone lines up to kneel on their pillows while Aunt Lydia speaks onstage. A man’s been convicted of a rape, and sentenced to death. We see the disconnect between state and individual, as the state sanctions widespread dehumanisation of women, lets the Commanders rape and impregnate women. Yet this lower man, still a rapist, is held to a different standard. These men are used to let the handmaids take out frustration. Capital punishment is carried out by their hand, as they beat him to death. All their hatred for the state is purged on this single individual. Such a strange, terrifying concept. 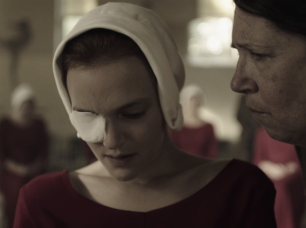 Another flashback to Offred and Moira outside, to when the former first believed she was pregnant. We see the original fears of women before the authoritarian state. Offred worried about a miscarriage, but she had Moira, her husband. She wasn’t kept under lock and key. Now, she’s in that tyrannical place without Moira.

“Was there ever a before?”

We see the further disconnect between the women, how they’re nurtured to distrust one another. Ofglen and Offred understand each other better as they talk more. We discover that Ofglen, in her real life, had a wife, a son named Oliver. They were able to flee to Canada while she was caught on the border without a passport. So many families divided, torn apart. So many women destroyed, abused, and much worse.
At the Commander’s home there’s a big meeting of men, all the while the women scuttle about preparing dinner and alcohol and everything else the patriarchy requires. And again there’s more disconnect. Offred can see how Serena, though more privileged, is just another woman to the men; though she has a seemingly better life than the rest, she is still excluded and set aside.
Furthermore, we now know Offred’s name was and is June. And she intends to survive this tyranny. Some way.

What an episode! Wow. I’m more than impressed, and satisfied as a fan of the novel. I’m excited for the next episode. Been grateful to get to see the first few episodes before the premiere.
Next is “Birth Day” and you can be sure, it doesn’t mean what it used to mean.