Offred (Elisabeth Moss) hears about what happened to Ofglen (Alexis Bledel). She was taken in a black van. Whisked away. She was a “member of the Resistance” and those are CHOICE WORDS for 2017. “I didn‘t even know her name,” Offred a.k.a June laments. Now the girl is gone. Disappeared in some cell, in an unknown place.

Flashbacks to June and Moira (Samira Wiley), jogging together and listening to tunes. They have a nasty confrontation with a guy in a coffee shop. He drops the word SLUT on them and this gets Moira particularly pissed. Open misogyny already, long before the patriarchy clamped down. June has troubles with her bank account, and later she sees men with guns come to the office where she works. A troubling development. Their boss has to let them go, required by law; all the women are gone. Ominous, as an army arrives. Not the regular US army, though.
In the present, Offred is tended to by Rita (Amanda Brugel), who’s suddenly more a fan of her. This shows us what goes in the minds of the women bent under the state. She didn’t care about her before. Since she hasn’t had a period yet, Rita deems her more worthy. Because she may be pregnant. Suddenly Offred, even in the eyes of other women like Rita in servitude and Serena (Yvonne Strahovski) in lesser servitude but still shackled, is more than nothing. For now. Until she’s given birth, like poor Janine (Madeline Brewer).
What Margaret Atwood’s book did well, as does this adaptation, is present how difficult life can be between women when the patriarchy has trodden them into near dust. She shows, through characters such as Serena and Aunt Lydia (Ann Dowd), that the ruling class of men oppressing women likewise leads to the oppression of women by other women. Devastating consequences in many forms.

Offred tries comforting Janine, who slips further into a bad mental state. She starts thinking she is free, that she can do what she wants because of her ability to conceive. Fine to think she can eat lots of ice cream. Not fine if she pushes it too far in that militarised zone. I hate to think what may happen to Janine. I truly worry, especially since she believes her Commander is in love.
Later we see Serena try justifying herself, in a way, to Offred. She says that she’s “blessed” to have her around. I can’t help thinking that’s a load of shit. Then there’s Nick (Max Minghella), I haven’t sussed out his purpose or what he’s up to, ultimately. Maybe he’s the reason Ofglen isn’t around anymore, maybe he isn’t. He has a properly nihilistic view of their new world, believing it’s useless to try acting hard: “Everybody breaks. Everybody.” And this time around, he’s taken her to a black van. He advises her to tell them whatever she knows. Uh oh.
Flashback to June and Moira, before the fall. Women cannot own property by law anymore; not money or a house, nothing. They’re starting to shut America down after the terrorist attack in Washington awhile back. Women are systematically being jailed, in every sense. Moira makes a good argument for why the #NotAllMen crowd need to shut up, because the heinousness of men is too terrible for us individual men to worry about being separated in name from the crowd. We do too much damage. In The Handmaid’s Tale, this is presented all too clear, in every bit of its rawness.

“Should I just go in the kitchen and cut my dick off?”

In the present, Offred is questioned by a man and zapped by Aunt Lydia. They want to know more of Ofglen, what they talked about, any mentions of unpatriotic activities, so on. Then up comes the subject of lesbianism. Touchy, especially when breeding stock and a known lesbian come into contact. According to their world Ofglen is a “gender traitor” and you’ve heard similar words before from rabid racists who use the term race traitor for white people empathetic/sympathetic to people of colour. In fact, this society expressly forbids the use of the word gay. 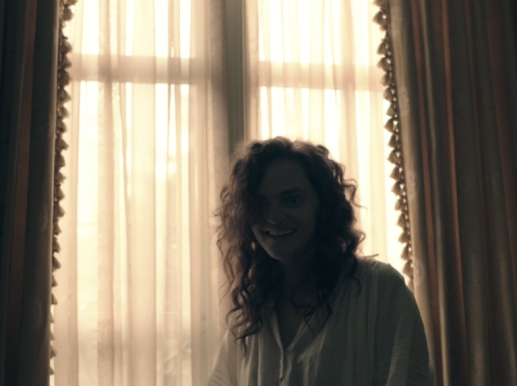 In the meantime, Ofglen spends her days with a mask covering her mouth, brought from one place to the next in shackles. She tries appealing to the baser needs of the guards, though they won’t bend. She is branded an “abomination” but sentenced to “redemption” because she is “fruitful.” Not a good omen, that’s absolutely positive. Ofglen’s lover is taken to a vacant lot where she’s lifted on a crane and hung by the neck. One of the slowest, most brutal death scenes without graphic violence that I’ve EVER SEEN! Ofglen is then carted away to her own, perhaps even slower punishment.
Nick goes to see Offred, bringing her ice for the stun stick wounds she suffered. There’s more to him, even if he’s complicit in the entire thing. He plays the whole nice guy card while alone with her, acting as if he could be the hero. But again, similar to what Moira spoke of in the earlier flashback, men are not the answer, they are the problem here; the nice ones, too. The women, eventually, are going to enact revolution. Whether it’s painful and bloody on the way is an entirely other situation. It will be women, though. They will not be saved by any men in this world, nor do they need it.
We flashback to a protest, before America fell to fascist, authoritarian government. A spooky rendition of “Heart of Glass” plays while the violence breaks out, the militarised police with their guns bearing down on the innocent protesters, man and woman alike. Guns start firing, then Moira and June finally realise the serious depths of what is happening around them. A tragic, emotional sequence as the two women run for their lives and hide.

Offred’s discovered she isn’t pregnant after all. Therefore, no more special treatment, and more of that skin crawling sex with Commander Waterford (Joseph Fiennes), held down by Serena as she watches on. Yuck. And once the infertile Mrs. Waterford hears the news, it’s not pleasant. At all. Fucking horrifying, actually. The woman is mad, driven mad by her complicity in the whole debacle. Then she tells Offred: “Things can get much worse for you.” Something that’s actually hard to imagine at this point.
We see that Ofglen’s been brought to a stark white facility. She finds there’s been a procedure done on her while she was unconscious. Aunt Lydia reveals her real name: Emily. She says things will be easier for the girl now. “You won‘t want what you cannot have,” Lydia tells her. Oh, man. Harsh. Like an Atwood vision of body horror.
By the way, the song playing at the end is “Waiting for Something” by Jay Reatard. Great tune for a whopping moment.

This was maybe my favourite episode. It gave us a window into before the fall, as well as other horrors in the new world of the authoritarian patriarchy. I can’t wait for the next episode. Very glad to have had the opportunity to preview these before the premiere!