Everyone at the church wakes up, the first morning after the mist came over their town. Adrian (Russell Posner) worries the others are “all dead” but Kevin (Morgan Spector) assures him they’re okay, that they’ve survived just like them. Upstairs, they look through a stained glass window’s scratch to spy a vehicle worth taking. They’ll need Mia (Danica Curcic), though the kid doesn’t trust her. And there’s the fact Connor (Darren Pettie) has her handcuffed. Those two dads are going to have a difficult moment, at some point.
Over in the mall, Eve (Alyssa Sutherland) comforts her daughter. Alex (Gus Birney) doesn’t exactly know how to be comforted, with the things outside, her rapist Jay (Luke Cosgrove) inside, people hanging themselves. The bodies are cut down by Jay and mall manager Gus Bradley (Isiah Whitlock Jr) – they’re military personnel, soldiers. Even more unsettling. There’s discussion of what to do with the corpses, then they want to search everyone for dog tags. One other soldier is left, a private in the army; he doesn’t have any information, so he says. But it’s more likely the military knows exactly what is happening.
Thus, suicides.

Natalie (Frances Conroy) talks about finding something 1860 in the newspapers. She’s told it’s supposedly a local legend concerning “the Black Spring” – a curse, after the murder of a young woman. Even creepier is they can see her husband Benedict lurking out there in the mist.
Then Kevin asks Connor to help them with getting to the mall, he needs Mia. Of course the cop won’t help. He’s suddenly concerned with law, despite leaving people behind to maybe die at the station. They get into a big argument which leads to the cop putting Mia in the basement. Bryan (Okezie Morro) keeps on looking out for her, helping her through the withdrawal symptoms; with a bottle of pills. Plus he gets her cuffs off. They form a mutual trust, as he’s just as lost in his own ways amongst the rest of the town. He didn’t even remember himself when he woke up.
After getting chewed out by the mall manager, the game store guys – Vic (Erik Knudsen) and Ted (Jonathan Malen) – decide they’ll make themselves useful. By using the bodies found to test the mist, to see what’s going on out there. Hmm, could make for interesting trouble.
One interesting note: I love the moral implications at play, in terms of the way Adrian sees things. He doesn’t like Jay, for likely raping Alex. He also does not trust Mia, as she’s accused for murder. The way Kevin sees no problem trusting Mia under the circumstances of what they’re facing, Adrian can’t reconcile morality on those terms.

Later when Kevin tries helping to free Mia and Bryan, he winds up down there with them after Connor the pig – in two senses of the word at this point – says some heinous shit about his wife and daughter.
Speaking of, Alex runs into Jay in one of the mall shops. He says he “didn‘t hurt” or “touch” her that night. So, is he a liar? I think so. He acts like he did something noble, taking her upstairs and covering her up to sleep off the drunk. Why not get her out of there, get her home? Anything could’ve happened by leaving her there. He’s a rapist, gaslighting his victim.
Out of nowhere, Natalie decides she’s going home. She means out into the mist, with her husband. When one of the men tries stopping her, a bug flies into his ear. Then, perfectly, it bulges out of the moth tattoo on his back, splitting him open, sprouting the wings through his flesh. A swarm of bugs flying from his mouth. Almost more terrifying is how Natalie reacts, as if she’s seen a revelation. Although not one out of the Bible.
Natalie: “It‘s okay, I don‘t want to die anymore. I‘m happy. I‘ve seen God.”
The remaining soldier flips when he finds the games store dudes put the bodies out in the open, as an experiment. Gus finds out and he’s not entirely pleased, either. But there’s no bringing them back inside. Moreover, they need to “establish a set of rules.” This could be where things begin getting out of hand, when new rules are imposed on people. Might get tricky. 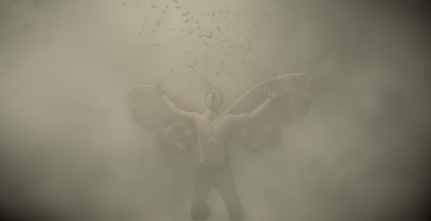 The priest believes God’s testing their faith. Of course, what else would be think? He reels off the story of Job to Adrian, telling about the challenge of Satan to God. Et cetera, et cetera. Job prospered in patience, ever faithful. The kid’s reaching out for any kind of love, even if it’s the love of God. So long as it’s genuine. An interesting gay character I want to see more of throughout this season.
Mostly the new rules at the mall cover not stealing from the various shops, these types of things. Then one of the security guards decides anybody who “endangers the group” gets tossed. Jay’s writing down the rules, clearly a part of the new makeshift administration with Gus. So Eve isn’t having that. Neither is shopkeeper Raj Al-Fayed (Nabeel El Khafif), not wanting to see what the prejudice against someone like himself will produce. To get themselves in a more suitable position of power, Eve grabs the guard’s gun: “I always was an anarchist.” Nice fucking move, mom! This woman is a goddamn survivor.
Adrian decides he wants to be baptised in the church, which Father Romanov does gladly. Helping him accept the love of God into his heart. Now he’s repenting sins. However, things get sort of weird. As if the boy’s being turned inward on himself. Yet he manages to slip some keys out of the priest’s pocket. To help his friends in the basement. WHAT A SMOOTH CAT! Jesus, people are surprising me here in this episode. Dig it. Not only that, Kevin gets to lay a few punches in on the asshole cop Connor before their little group makes off out the doors.
At the mall, Alex works on notes to tie on a ton of balloons, they let them fly in the air outside to maybe reach help somewhere, to reach anybody and let them know survivors are there. Let’s hope Kevin and his friends get there soon. In one piece.

I’ve got to say, The Mist is defying my personal expectations. I didn’t think it’d thrill me in the way it is already. First three episodes are fantastic, I look forward to the rest. These characters have drawn me in, their predicaments are compelling. Effects aren’t always perfect but they’re intense and imaginative at times so far, so that’s enough for me.
“Pequod” is the next episode and it’s sure to provide us with something wild again.