Roll those eyes all you want— we’re digging into Jim Muro’s 1987 shlockfest of gore + weird, Street Trash! For all its trashiness, there’s decent socioeconomic commentary buried in this seemingly pointless story.
After the 1970s, New York City couldn’t get any worse. Although things weren’t much better in the ’80s. Still lots of crime, corruption, and the homeless population kept growing. Along with little change in social conditions, the attitudes towards social issues and those affected by them hadn’t changed much, either. Homelessness, even today, is demonised, let alone back in the late ’80s. Many were unsympathetic towards the plight of those who had to sleep on the street, least of which certainly weren’t capitalists.
This is basically the crux of Street Trash— the homeless are disregarded except when it comes to any way a business/organisation can capitalise on their existence, thus the nasty booze Viper is unloaded onto street alcoholics, whose organs liquefy after just one drink. We see a homeless community already divided by mental illness, alcoholism, and other issues, only further disrupted by the deadly Viper. A ridiculous B-movie, yes. Not without its charms, nor its smarts.

Immediately we’re introduced to the urban and social decay of NYC. The urban area of the city is full of the homeless, cheque cashing places attached directly to liquor stores where our greedy society has conveniently placed the two business, among other landmarks typical of deteriorated areas. Already we see the tell-tale signs of exploitation of the working/lower classes. All the city’s most vulnerable are taken advantage of by destructive businesses. Low prices, in a capitalist economy, are often indicative of what’s destructive or unhealthy, such as how cheap food is, more often than not, so much worse than overpriced healthy food. In comes Viper! A sleazy liquor store owner wants to make a quick buck, so he shells out a bunch of unknown booze for financial gain. A massive negative to urbanism.
Along with addictions and mental health issues, urban areas are unfortunately plagued by senseless violence. It’s usually brought about/perpetuated by the conditions in which they’re forced to live. Like in Street Trash, the lowest classes get turned against one another. A hierarchy exists between the regular homeless and Bronson (Vic Noto), a self-imposed leader amongst the community. He’s also a damaged, forgotten Vietnam veteran.
The character of Bronson brings an entirely new perspective into the story. Just his presence and the terrifying nature of his psychopathy is an indictment of how imperial America – driven by greed+war – can’t even take care of its own veterans with all their money. He’s left to deteriorate mentally until he becomes a danger to himself and everyone else around him, ruling the homeless with an iron fist. Instead of being given help he’s chased down by police. Worst of all, in retrospect, it hasn’t gotten any better. Only today, conservatives try blaming it on immigration instead of the fact they’re simply failing their own citizens, or, y’know, actively refusing to do anything for them— to-ma-to, to-mah-to.

“That’s ’cause you boys haven’t learned to shop frugal.” 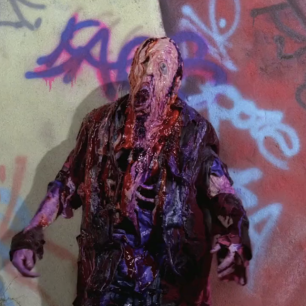 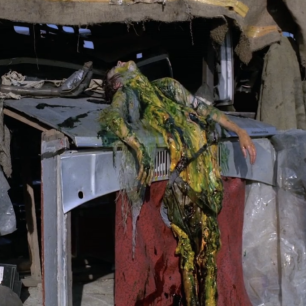 Perhaps the best part of Street Trash is the function of all the gory, gooey, grisly decomposition occurring after the homeless sip on the Viper liquor. They literally become waste— symbolic of how they’re treated by a society who couldn’t care any less about the underlying issues of their homelessness, only how their homelessness creates trouble for society. Like the decaying urban environment around them, the homeless community – via Viper’s devastating effects – deteriorate physically becoming part of the junkyard wasteland in which they live. Similar to how homelessness removes the barrier of interior v. exterior – demarcating space/place – their bodies transform into a part of the landscape of waste itself, no longer bodies but junk in the yard.
The best instance is the 1st Viper death. Muro frames the gruesome death of this man with shots of ruined buildings, shattered glass everywhere, fields of debris and various junk. As the homeless man melts his cries are absorbed in the silence of a ruined, forgotten area of the city far removed from the boundaries of so-called civilised parts of the city. The cherry on top: he melts into a non-working toilet. Usually, a toilet’s function is to carry away waste, taking unclean, abject things we don’t want to think of/deal with and moves it somewhere deemed acceptable. Problem is, this toilet’s just a shell, porcelain bones sitting amongst other unusable things, including humans seen as broken/not fixable, and so the waste – the liquefied homeless man – only remains in the wasteland. A tragic cycle of destruction. A wasteland of capitalist failure(s).

In its own unique and hideous way, Street Trash has a whole lot of things to say about society, its treatment of the homeless and the lower classes, as well as the way in which a filthy rich capitalist society such as the USA ignores its veterans while banging on the war drum all but constantly, decade after decade. The city, here, is a treacherous, unforgiving, trash-filled landscape, a heap of discarded, forgotten bodies and metal and rubble.
Not to say Muro and screenwriter Roy Frumkes were aiming at anything lofty with their material other than trying hard to be gross + wild. Neither does it mean the movie can’t succeed on both levels. Critical theory is all about how the viewer interprets a movie. It doesn’t matter about intent. It matters how the audience infers what’s being said by the movie itself, not its makers.
Just as easy to sit back, let this ’80s classic of trashy horror thrill you with nonsense! Nobody has to take it so seriously. But in a day and age where people want to discount horror as a genre when they think certain modern movies are ‘advancing the genre’ by suddenly being focused on social issues, it’s worth noting how even the seemingly shittiest little horrors can provide us with food for thought. Father Gore would rather look for gold in the turds instead of tearing down an entire genre. Ultimately, a movie like Street Trash proves genre cinema can be so much more than only a good, fun time— in genre, there’s power.