First off – I’m not one of these snobs who feels the need to distinguish between a “zombie film” and an “infection film”, okay? If you’re going to argue with me, or not take my opinion on this great movie seriously solely because of the fact I’m going to call this a zombie movie (as I will any movie that features infected people who kill other human beings), then turn away now! For I will throw out the words “zombie film” & “zombie movie” like I’m giving away candy.

Are you ready? Then let’s begin.

It’s actually sort of funny when I think about it – [Rec] is a combination of two very played out, tired sub-genres of horror: found footage and zombies. Now, I’m not saying these are the types of films I don’t enjoy. On the contrary, I love both found footage and zombies. That’s if they’re done well. Just as gangs of undead roam the apocalyptic streets of the sub-genre, hordes of zombie films crowd the market, as tons and tons of young amateur horror directors try to us their vision of such a world. There are actually a lot of really great zombie movies, however, as many of them that are good are paralleled with equal numbers which are mediocre (at best) to terrible – to unfortunate. The same goes for found footage. I really enjoy a bunch of found footage movies. By the same token, I can think of more than several handfuls that I did not enjoy. I think more and more these days, the amateur horror director now leans towards doing a found footage film above a zombie movie. Because whereas a zombie movie can be done on a low-to-non-existent budget, you can do found footage for as much or less.

Then there is [Rec].

These two directors show us the story of a television reporter, Ángela Vidal [Manuela Velasco], and her cameraman, Pablo [Pablo Rosso], who are filming footage of the night shift at a local fire station. When an old woman calls, apparently trapped in her apartment, the firemen respond. Terrible screams are heard from the old woman’s apartment. Afterwards, the firefighters, along with Ángela & Pablo, discover what exactly is happening. From here, the night turns into a nightmarish situation for the news crew, the firefighters, and everyone in the building, as soon they are all trapped inside the building. While the situation unfolds, Ángela makes Pablo keep filming to make sure the outside world knows what horror has begun.

One aspect which can really kill a found footage film is how the filmmakers actually present the so-called footage. For instance, in Ti West’s recent film The Sacrament he used the real life news outlet VICE to help portray the footage itself – as they often do stories that are considered “immersionism”, this fit the film well because West was able to edit things, add a very foreboding score, and other such things. In the case of [Rec], Balagueró and Plaza present their film as a television news report. Essentially it all goes awry, and then the reporter plus her cameraman are left to fend for themselves. The fact Ángela urges Pablo to keep filming so they can let the world know what is happening in the building really helps the found footage angle work. Usually, we get people arguing “turn off the camera”, and then it all devolves into arguments, screaming, characters are then divided to later be killed off, or whatever the case. In this sense, many found footage movies can really blend together into the same old garbage. However, by having Pablo keep filming at the insistence of Ángela, this really makes things feel natural. It’s not one of those roll your eyes moments where you think “how typical”. This is one of my favourite things about this movie. I think [Rec]2 also did a good job of continuing this trend, and making the presence of found footage feel much more real than other lesser films. 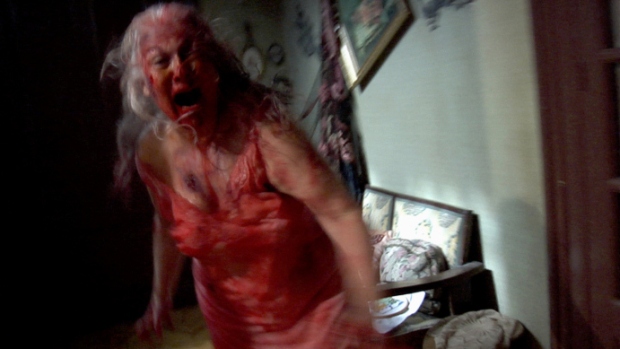 I think while a couple performances, particularly those of Manuela Velasco and even Pablo Rosso, were really good, much of what I most enjoyed about [Rec] was the blood and the zombies. I mean, that’s what we really come to a zombie movie looking to find. With this film, you will get your money’s worth. In particular, I just wanted to mention one of the last zombies we actually get to see in the movie. Without ruining anything in the plot, there’s this extremely terrifying zombie wandering around in the basement when Ángela and Pablo make their way down there. You’ll know which one I’m talking about because this scary lady is not only naked – she’s brandishing what looks like a ball-peen hammer. Now, I won’t go any further and say what exactly happens. I’ll just say this one bit of zombie make-up really looked spectacular. It’s very rare I actually drop my jaw and lean into the screen for a closer look at something creepy. This moment had me glued. I really love it. Plus, what happens after they come across this specific zombie is wild. 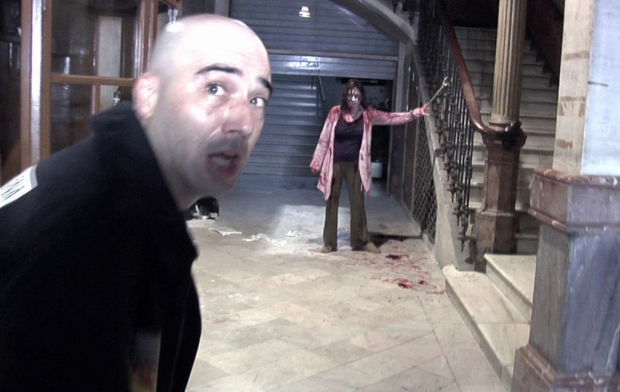 I can give this a 4.5 out of 5 stars easily. This is one of the best zombie films out there. I know there are a lot of purists who seem to think George A. Romero is the only person to ever make a real zombie film. I say that’s absolute bullshit. He is the godfather of the modern zombie sub-genre in horror. Of that, there is no doubt. But you can’t discount a whole sub-genre (or maybe you could say it’s a genre unto its own nowadays with The Walking Dead dominating television on AMC) by saying only one man can do it right. I love his films. Still, there are plenty of other great zombies out there. Some of those are in [Rec]. 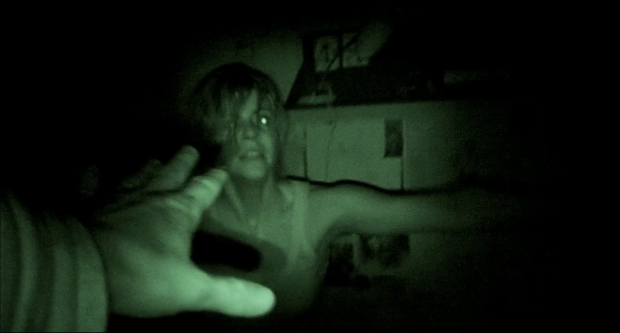 With the newest addition to the series out in the last few days, I wanted to revisit this modern classic. I love this one, as well as the sequel. And while I don’t particularly dig the third installment, this fourth movie almost reminds me of one of the Resident Evil games – Revelations, I believe – takes place on a ship in the middle of the ocean. Anyways – point is, I’m looking forward to seeing it myself. While it doesn’t seem to be the favourite of critics, I never usually fall in line with popular opinions. I’ll wait and see myself. If you’ve not yet seen any of these, please do yourself a favour and watch them soon. [Rec] is a fascinating found footage film, and it brings all the zombie carnage and mayhem you could have hoped for – highly recommended.