The finale is upon us! Who will survive, and WHAT WILL BE LEFT OF THEM?
After the head crushing finish of the penultimate finisher, “North” starts out on Travis (Cliff Curtis) having unleashed fury on the two young men who put Chris (Lorenzo James Henrie) down after being injured in their car wreck. In the process, he hurt Oscar (Andres Londono) real bad. This isn’t going to sit well with anyone in the hotel. Elena (Karen Bethzabe) has him taken away, locked up somewhere. Everything is getting pretty rough at this point. Madison (Kim Dickens) tries her best to keep a cool head, at the request of Strand (Colman Domingo). She then takes Alicia’s (Alycia Debnam-Carey) knife to go put walkers Brandon and Derek out of their misery. Feels like Madison is starting to rage in her own way, too. Ain’t just Travis anymore. Strand, he looks worried.

At the colonia, Luciana (Danay Garcia) patches up Alejandro (Paul Calderon), whose bite is fierce. He’s getting sick, and fast. She wants to try making him look “presentable,” but he sees the end coming now. It doesn’t look pretty. She stays with him to help, although Luciana’s not impressed. “This is ending,” Alejandro says. But she thinks there’s still a future there for the rest of them.
Strand wants Madison to calm down. Technically, Travis has gone against the rules they’ve set out. “We‘ve lost our place,” Alicia says about their situation in the hotel. Going against them, Strand believes Travis can’t stay there. And Alicia wants to leave, take him, set out on their own once more. She’s sick of losing people and wants to not become hardened people, willing to give up the lives of others for a safe space to lay their head. At this point, Strand is set apart from them. Not sure if they’ll come back together, or if Strand will stay at the hotel for good. The agreement is to let Travis out of his lockup until dawn when the group heads for the hills.
Nick’s packed and ready to leave the colonia, with or without Luciana. She stubbornly won’t go anywhere. Marcos (Alejandro Edda) is coming, at some point or another. “Do what you do, Nick – run,” Luciana taunts.
With Oscar unconscious things are awful for the people at the hotel. Alicia tries to help. Nobody really wants it, though. They’ve got their hands full trying to do homemade surgery on Oscar.

In front of everybody, Alejandro limps sickly to his people and confronts them with the truth about Marcos. He does his best to inspire them. Simultaneously, Nick heads for the wall of zombies. He smears himself well with blood, then ventures into the vast unknown past their wall. While Alejandro spins a fairy tale of bullshit to the colonia, Nick spies a helicopter touching down in the distance.
Oscar’s surgery goes on as Madison and Travis spend their last night in the hotel upstairs. “Whoever you think I am, whatever part of me you think is the same, it‘s not,” Travis tells her. She agrees those two guys deserved to die after what happened, after all that happened with them on the road. Madison believes herself worse than him. They’ve bonded closely over this brutality, and that’s how it goes in the new world post-zombie apocalypse. A beautiful little moment between these two; and boy, did they need it! Downstairs, Oscar lies dead on the table. So now, will there be war? Oh, it seems that way. The men go for Travis in the middle of the night. Andrés (Raul Casso) puts a gun to Travis for killing his brother. When Alicia stabs him, all bets are off. Strand winds up getting his hands on the gun flicking across the floor, and states the obvious: “We need to get out now.” If only for the fact Strand won’t leave with them. No, please! I love Strand, I hate to see the group separate. He’s awesome and I don’t want him to die. So as long as he sticks around on the show, that’s fine. Just don’t kill him AMC, you bastards.
The road ahead for Madison, Alicia, and Travis doesn’t look great. But better than getting torn apart by everyone back at the hotel.

Alejandro gets a surprise visit from Nick. He’s come back after seeing the helicopter, finding Alejandro incredibly sick. They have a frank chat about dying. About whether to leave. Nick believes actually caring about the people in the colonia would mean doing the right thing; getting them out. To be a good man, Alejandro must “let them go.” That helicopter, it landed across the border in a camp. Nick sees hope out there.
In the big supermarket, now empty, Alicia, Madison, and Travis search for information about the colonia. They also see hope – that maybe they can find Nick again. Well, they stumble across that death room where Marco had a bunch of dead bodies. Not a nice place. Although they may be able to figure out how to get to colonia if there’s anything left on the corpses. And there just may be some clues.
In the daytime, Marco and his crew roll out to the colonia. There, they first come across the wall of undead. Heading into the bus they find it’s “too easy.” After they’re all the way inside Marco discovers a veritable ghost town. Nobody visible, anywhere. Not from far away, anyways. Alejandro’s still lurking, looking to die a “beautiful death” as Nick predicted. He’s well enough to get to the bus, put it in drive, and let the walkers crawl on in. Colonia no longer secure.
Along a city road Nick and Luciana lead the good colonia citizens elsewhere, out towards the border in a bid to maybe find that camp, maybe a helicopter. Anything’s better than being slaughtered by drug dealers. 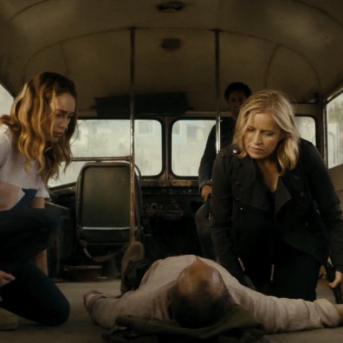 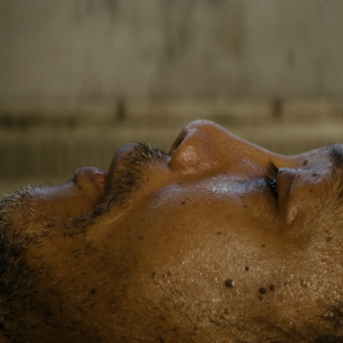 On their own way, Madison and Travis head into the colonia. Fuck, shit, FUCK! Always one step behind Nick. Outside, Alicia waits by herself, but then decides to go in towards the bus. The tension is killing me. Of course the inner sanctum is covered in walkers, dropped guns. Even Marco is a zombie. Every last person is dead. Alicia finds Alejandro at the bus and makes him comfortable. He tells them about Nick and the plan to head towards the border. At least they know which direction he’s going. Someday they may cross paths again.
The border is littered with cars, a scattered zombie here or there. Nick and Luciana take the group through the gates. He looks out towards the horizon spotting a helicopter through binoculars, a refugee camp not too far off. Then from nowhere a man with a gun. Luciana takes a bullet. Reynaldo, as well. Armed militia-style men take the group over. Nick and Luciana are cornered.
With Madison, Alicia, and Travis seeing Alejandro out of life once and for all, Nick is beaten down by the armed men. Nobody’s future is certain, as we always know a little too well. How will the next season begin? Where will they all be?

A tragic and exciting end to this season. I dig it! Very ominous. Lots could happen.
Let’s await Season 3 with a new season of The Walking Dead in a few weeks.