With Mike Ehrmantraut (Jonathan Banks) recovering from his recent beating, as well as Jimmy McGill (Bob Odenkirk) licking his wounds for the time being and trying to keep Kim Wexler (Rhea Seehorn) in his life, Better Call Saul‘s Season 2 continues on full steam ahead.
This episode begins with Chuck McGill (Michael McKean) setting up dim lights, putting on a record then getting dinner ready. His wife, Rebecca (Ann Cusack), is helping, too. They’re normal, happy, talking about work and their day. Turns out this is when Rebecca meets brother Jimmy.
What an excellent, interesting flash into the past of the Brothers McGill. A time when Jimmy was unsuccessful, the lesser brother doing nothing, and when Chuck did not have his serious affliction to the electronics around him. So what exactly happened from there to the present timeline? Regardless, Chuck gives the signal to his wife, hoping to get Jimmy out of the house, but she’s more interested in hearing the younger brother’s jokes. Later in bed when Chuck tries one out it doesn’t get near the same response.

Back to 2003. Jimmy is finding it tough to adjust to office life, from the regular everyday grind to the recycling situation. The “house style” is being introduced to Jimmy, including punctuation and so on. Something he’s not entirely interested in; too much micromanaging. At the same time, Kim is dodging Jimmy on the phone while doing the dirty work in a boardroom, her new assignment for aiding him in the commercial fiasco. He shows up soon enough suggesting she sue Hamlin, Hamlin & McGill. Jimmy’s mostly concerned with Chuck and his involvement, though she insists this is her “paying the price” for her idiotic decision to side with Jimmy. And she wants him to clean up his act, as well as to stop bullshitting. 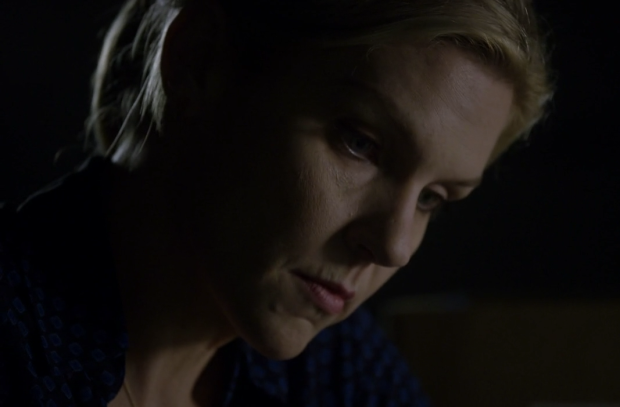 At the office, Jimmy is forced to deal with the co-worker, Erin (Jessie Ennis), he ducked the night before. Simultaneously, Kim is trying to gain more clients for HHM, either getting refused or hit on or let down easily from one call to the next. Kudos to her all the same; she’s trying, unlike Jimmy who takes frequent shortcuts.
And finally, back to Mike. He’s checking in on daughter-in-law Stacey (Kerry Condon). Grandpa Mike has put her and his granddaughter up in a hotel, having fun. He’s busy with his day job, nursing those old wounds, which he attributes to a car crash. The next chapters in the life of Mike will certainly be interesting to see.
Erin and Jimmy come up against one another when he tries to give over a Beanie Baby to get a court date. She won’t have this “bribe“, but he insists it’s simply a little gift. He’s forced to take later date than hoped, worried about Howard (Patrick Fabian) getting reports from Erin. In a bathroom, Jimmy sees an old friend who queries him on all the benefits of working at Davis & Main: “I‘d kill my mother for a fireplace,” he says after hearing Jimmy has one in his office.
A nice Spanish cover of Frank Sinatra’s “My Way” accompanies more of Kim wheeling and dealing, trying to drum up some more business for herself in order to get back in the HHM good books. Not too long and she receives a positive phone call, one that has her nearly jumping for joy. Maybe things are looking up for ole Wexler. 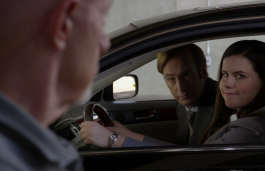 Up at the HHM offices arrive Paige (Cara Pifko) and Kevin (Rex Linn), clearly from a large banking institution. Howard lays on the charm with stories of being a boy and his “first bank account“, along with a silhouetted cowboy banking book. What a greaser. None of what Kim’s done phases him, as he keeps up a smug demeanour the entire time. He essentially banishes her back down to the boardroom on review without looking at her twice. Ouch.
In the low light of Chuck’s place, Howard meets with him. They talk of Kim and her latest accomplishment. But she’s not “out of the doghouse“, as Howard makes that clear. A ton of work coming from what Kim has done, yet Hamlin is far less enthused than Chuck. Perhaps a further vendetta by Howard is causing this behaviour towards Kim? 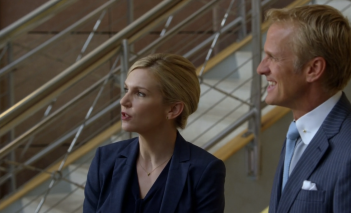 In other news, Chuck arrives, lantern in hand, to the office. At his desk he whittles away the time doing work. Until a low level light starts to bother him. He finds Kim putting away some files and they chat over coffees. She flat out asks Chuck: “Do I have a future at this firm?” He goes into his own disappointment with brother Jimmy, as if trying to sabotage every bit of the life he’s trying to create for himself. There’s a discussion of the McGill father, supposedly a perfect, good man, whose hard work allowed them to survive and prosper. Until money troubles made it all difficult, prompting Chuck into an accounting position; Jimmy “pilfered” thousands of dollars, according to big brother. The start of all the woes. The start of all Chuck’s aggravation with his brother.

Chuck (re: Jimmy): “He can‘t help himself. Then everyone‘s left picking up the pieces.”

At a diner, Mike is greeted by a familiar Breaking Bad face: Hector Salamanca (Mark Margolis). He wants to talk about the recent trouble with Tuco (Raymond Cruz), the old man’s nephew: “He should have shown you respect. I apologize to you, on behalf of my family.” Mike accepts this gracious offering. They talk about how long Tuco ought to stay behind bars, perhaps there’s a different way out of everything.
It’s fun to see Hector long before the stroke immobilized him, before he could only talk with a bell nailed to his wheelchair. Adds a larger dimension to him, as well as gives us things to look forward to in this series.

Can’t wait for the next episode, “Bali Ha’i”, and with all these developments it’ll absolutely be intriguing. Stay tuned, my fellow fans.